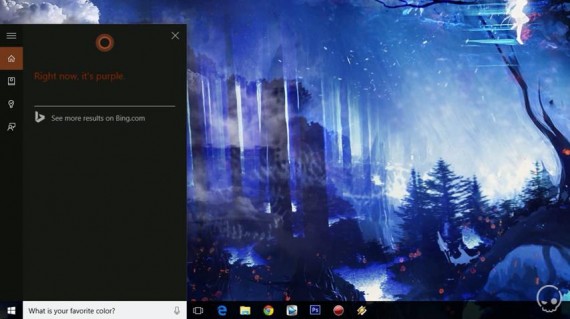 With the Windows 10 event from Microsoft just hours away, even Cortana is giving leaks and clues regarding the hardware that is sure to make an appearance: The Surface All-In-One desktop. (Photo : Lockstin / Gnoggin/YouTube)

Various media outlets have reported on the upcoming hardware from Microsoft based on hearsay and rumors. However, with October 26 just hours away, the public is finally receiving what could be the most trustworthy clues on the devices that will be unveiled. By asking Cortana a simple question, the virtual assistant provides some very vital information.

By asking Cortana to "Spark my imagination," the virtual assistant provides four answers. One of them is "Constraints can inspire creativity. Since 3D printers are too small to print an entire dress, designers found a way to print a dress while folded." The other, as noted by MS Power User is "Artful, practical solutions can be found in nature. George de Mestral invented Velcro after observing the way burrs clung to dog's fur."

The third possible answer is "Artistic hobbies foster creative problem solving. Research shows that Nobel-laureate scientists are more likely to draw, paint or play an instrument." The last is "Sometimes a change in scenery is all it takes. Gertrude Stein got many of her good ideas while driving around looking at cows.

While these statements may seem unrelated and completely pulled out of nowhere, one can bet that Microsoft planted them specifically. The Verge notes that these answers are actually clues to the upcoming Surface All-In-One Desktop, which is expected to showcase the power of the updated Windows 10 on October 26. Mainly, this is because the device is believed to also act as a drawing tool, which can be laid flat on a desk.

Piecing all the statements together, it seems that the Redmond-based company will be unveiling a Surface device that will run on a 3D ecosystem for Window 10. This system will reportedly partner up an updated Microsoft Paint feature, the HoloLens headset and even new peripherals for creating 3D objects and holograms. To further this, Microsoft's Windows and devices Vice President, Yusuf Mehdi, posted "Get ready to get creative" on Twitter earlier this month.

Barely anything has been confirmed about the Surface All-In-One, but it is expected to completely alter the realm of desktops as they are currently known. Much like its predecessors - like the Surface Pro and Surface Book - have done, the Surface AIO is likely to push the general expectations of a desktop machine. Apple is, after all, expected to unveil the new 2016 MacBook Pro just the day after on October 27 and Microsoft will not let its biggest competitor steal the limelight.

The Surface All-In-One Desktop is expected to come in two variants, which differ primarily in just size. The 24-inch variant and the 27-inch variant will give buyers ample options to choose which is more suited to their needs. The device's hinge will apparent allow the unit to morph into a drawing tool, almost like the Surface Book transforms from a laptop into a tablet. Of course, a stylus pen and touch screen feature will also be available.

Once again, these are not official claims by the tech giant whatsoever and are only being pieced together. Fortunately, Microsoft will soon make everything clear, as the event will begin at 10AM ET / 7AM PT in New York. The night is also being live streamed here.

There is no doubt that the Surface products from Microsoft are some of the most popular items in the tech market. But the company’s recent Q3 earnings only proves just how popular the Surface Book and Surface Pro 4 have been.

What To Expect From 2016 MacBook Pro: Line Up Of Specs, Features And Leaks

With Apple’s October event just days away, the 2016 MacBook Pro - with its new specs, updated features, and overall better design - is a rising star.

If you have already installed the Microsoft's Windows 10 Creators Update on your Surface Book or Surface Pro 4, you can download the new updates right now by checking Windows Update of your gadget.