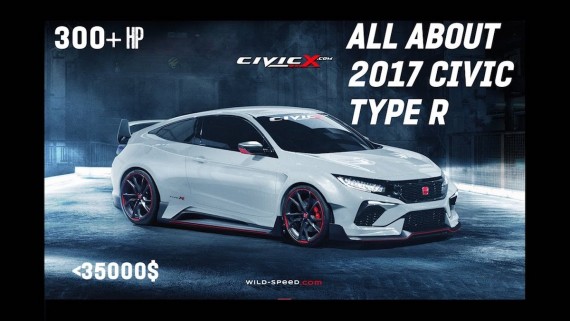 Honda enthusiasts are in for a treat as Honda has now revealed the all-new 2017 Civic Hatch Type-R (Photo : Car News)

For years, Hot Hatchbacks have been leaving both drivers and car enthusiasts in awe. High-performance streetcar manufacturers have been releasing hatchback counterparts of their sedan versions. And, one of the most talked about models is the 2017 Honda Civic Type-R Hatch.

Honda has recently released its Civic Type-R and has been turning heads ever since. Still equipped with VTEC, Honda added a turbo to its Type-R model. The Type-R model comes with a 6-speed manual transmission, a mechanical Limited Slip differential, and has a 306bhp score on the dyno run, according to TopGear.

It has been quite a while since the last Honda Civic Hatchback was released, so fans are really eager for this new model. As with the upgraded features of the Type-R sedan version, much is also expected for the new hatchback.

The new 2017 Honda Civic Type-R, aesthetically, is expected to be wild looking when it goes on sale towards the end of 2017. Functional aero kits, air scoops, big wheels, and spoilers at the rear are on the wish list of enthusiasts.

The Type-R hatch is also likely to have the same 2.0-liter Turbo VTEC engine that produces up to 306bhp. The Ford Focus RS, one of the models top rivals, puts out 345bhp, and Honda's competitive nature might not let that pass with its upcoming model.

Honda cars have always been slow to de-value. Some used 1996 Civic models can still be purchased today for around $4000 dollars, which is expensive for a 20-year-old car. Despite the age, Civics has been proven to withstood the tests of time and has a huge market for tuners and hobbyists alike to purchase upgrades.

Older Civics can only be fitted with an aftermarket turbo since Honda never included one on the package. This gave room to enthusiast to learn and work on their cars to bring out the best performance. VTEC technology is a big hit for Honda fans as it gives the boost needed even without a turbo.

However, times are changing, and most car manufacturers now have their own version of the VTEC. With this, fans have been doing numerous upgrades, which include fitting a turbo, in their Civics. It was only a matter of time before the Honda engineers decided to fit in a turbo straight from the factory.

With the current trend, Honda has only been introducing a hatchback for every few years and fans are glad that the new one will finally arrive. Every Civic version that Honda has released has been loyal to its worthy owners and became an even more reliable car both as a daily and for a track day. True Honda enthusiasts know that every wait is worth it as they know that this new Civic will last for decades.

With its reliable history, and now fitted with a bigger engine. VTEC and a turbo, and a mean look, this type-R hatch could be Honda's best car released in years.

The Audi makes driving more fun as they introduce a convertible version for the new Audi R8 5.2liter V10.

Tesla To Incorporate All Units With NVIDIA Processors

Graphics specialist NVIDIA gains a big win with Tesla motors as the two companies’ plan continue to progress in their quest for the ultimate autonomous car.

Continental AG makes unlocking cars more convenient by using the owners’ smartphone rather than the car keys and remote.

AMG Is About To Unleash Something Crazy And Muscular

With a vast experience of performance car manufacturing and creating milestones in racing history since the 70s, AMG is about to unleash another machine that will surely dominate the streets and the track.

Honda WGN Modulo X Spec Revealed: Is This The Carmaker's Best Minivan Yet?

Honda introduces its Minivan with a newer Modulo X version. The Step WGN gets a serious upgrade.

One of the newest technologies in cars is the ability to drive autonomously even on public roads. Questions have risen on how this feature can affect pedestrians and other road users.

With the year 2016 at its third quarter, two of the world’s top car contenders, Germany’s Porsche and America’s Chevrolet, face off as they introduce their 2017 sports cars.

The 2017 Chevrolet Camaro cuts off its price to reach more consumers. The price drop of the upcoming Chevy brings it closer to the well-known muscle, the Ford Mustang.

BMW has finally announced its release for the highly anticipated 5-Series. The car manufacturer’s enthusiast can now pre-order the rival to the Mercedes E-Class and Audi A6.