Trump vs Clinton: Is Social Media To Blame For The 2016 Presidential Elections' Most Embarrassing Gaffes? 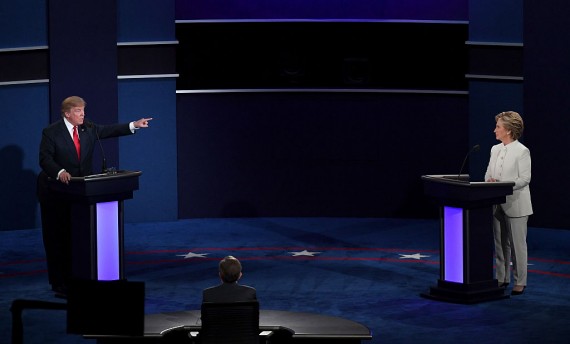 The 2016 U.S. presidential elections have turned into a circus. Is social media to blame? (Photo : Photo by Ethan Miller/Getty Images)

The 2016 U.S. will be remembered for having two of the most controversial candidates of all time, for having the Russian government trying to interfere with it, for having WikiLeaks publishing secret documents regarding one candidate, and for many other reasons that will make this event the most important moment of the year.

However, it will be also remembered for the role that social media has to pump up any virtue, flaw or gaffe of each candidate, to the point where it suddenly became the most hegemonic power in an election, beating traditional mass media and even the political campaigns.

Politicians Must Use Social Media, Whether They Like It Or Not

This way, social media is now the most powerful and dangerous weapon than a politician can use to spread its message to voters, having the chance to get to anyone in the world within seconds. When the message is good the situation is perfect for them, but when they made any mistake, the message could be a so harmful backfire that might ruin their aspirations to achieve a higher political position.

The most incredible detail about this issue is that politicians cannot choose the option of being cautious and not entering into a platform that could harm them, giving the fact that social media are so expanded in the world that not having one, means that you don't exist. This situation makes these platform the real judges, and increase people´s power to decide who to vote for.

According to Government Technology, politicians now use these platforms more than ever, giving the fact that everyone´s does as well. Actually, it has been proved that people among 18-to 29-years-olds, nearly two-thirds said social media is the most helpful means of learning new things about politics.

This, of course, makes it easier than ever to know when a politician made a mistake, and people can maintain that flaw for days, weeks, or even months, regardless if there´s more significant news. This is precisely one of the most important and unpredictable features about these platforms: the fact that there´s no editor who could rank or predict which event will be the most viewed, criticized or reproduced.

This is why social media are so difficult for politicians to control it, which could be a double-edged sword, giving the fact that there´s no filter and people can endorse and destroy the wrong or the right person (orr event).Making a wrong statement or taking a picture at the wrong moment has always happened, but there haven't been something as powerful as these platforms.

Blaming the social media for the most embarrassing gaffes in the U.S. presidential elections would exonerate candidates´ imprudence -and sometimes stupidity- , but it is an undeniable fact that these platforms expands their flaws in a way than a single image or a single post could be more viewed and discussed than any other thing.

In fact, it could create a domino effect that could destroy a candidate, because somehow, its capacity of destruction is much more powerful than its capacity to endorse. This is something that has changed the politicians´ modus operandi, because they now have to be aware that any single gesture or any single word can make the difference, which is why they now have many more communications strategies than never before.

The reason why the gaffe phenomenon is more usual in this elections than in the last one, considering that social media already existed, is that the platforms are more powerful now. According to KVIA, the combination between these platforms and the candidates' mistakes has made this elections a very stressful event, considering that if politics are now in these platforms, it means that politics is already everywhere.

In short, the gaffe exaggeration we are living right now is only because of Trump´s and Clinton´s follies, but it's a fact that without the social media, it fame wouldn't last more than a week, WikiLeaks would have a hard time to publish the secret files, and the people probably wouldn't know how many stupidities both candidates have done or said.

WikiLeaks And The 2016 US Presidential Elections: Why America Seems Intent On Silencing Julian Assange

If Julian Assange really has nothing to show for, why does it seem like the U.S. is doing everything it can to silence him?

Zuckerberg´s position on ideological diversity might cause him serious problems with Silicon Valley´s leaders.

Ecuador has confirmed that it was behind the cutting off of Julian Assange's internet last weekend. Were the country's actions motivated by the United States?

The US Marines prepare for a more futuristic warfare as they have been secretly testing robot soldiers and hypersubs for the past few weeks. These new machines were evaluated on how they perform in realistic scenarios.

After surpassing Ford's market value on Monday, Tesla now inches closer to GM's top spot as most valuable US car company. The popular and fast rising company still continues to rise as profits are projected to rise some more despite some criticism over its value.