WWE Rumors: The Undertaker Vs. Goldberg, Randy Orton Not Present In Survivor Series, And More 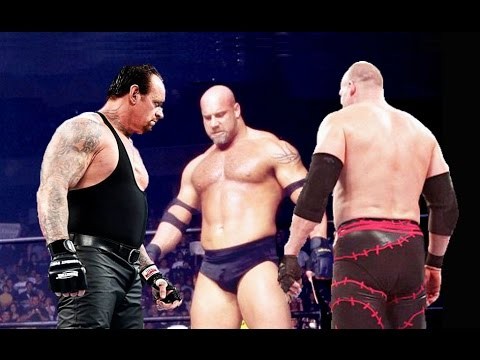 Lots of rumors and speculations have been swirling around about WWE. Can a Goldberg vs. The Undertaker match be on its way? Plus more rumors on Brock Lesnar, Randy Orton, and the upcoming Wrestlemania. (Photo : WMania/Youtube)

The WWE universe could be in for a shock, as rumors point out that the company is looking for ways to pit Bill Goldberg opposite the Undertaker at Wrestlemania. But this is not a sure thing, as this dream match would highly depend on how the crowd reacts to him when he tangles with his arch nemesis, Brock Lesnar.

Despite stating that this match would be his last during his explosive WWE Raw return, the WWE is already contemplating giving Bill Goldberg one more match. This time the match might even get more legendary than even Brock Lesnar, as the opponent is none other than the Undertaker.

Now it would really make a lot of sense at this point. First of all, Bill Goldberg is already nearing 50 years old and if the WWE would like to keep milking that cow, it makes sense to make the most of it. And a match with the legendary Undertaker at Wrestlemania is the biggest match of them all.

Second is the fact that Undertaker needs to end his wrestling career on a better note. His last match was with Shane McMahon and really isn't fitting of his final match. The problem lies with the Undertaker having tangled with nearly all wrestlers you can name. Shawn Michaels is done, so is Triple H, and even Brock Lesnar. Having someone fresh for him to end his illustrious career like Bill Goldberg will add that final feather in the cap of the Phenom.

And if you think this is just a wild rumor, you might want to see this little gem from Forbes:

"It's possible a three-match program with Lesnar, or a match with Undertaker (provided Undertaker returns at WrestleMania, as Undertaker told everyone after last year's show that it was his final match) could be a big match at WrestleMania."

But of course, this would highly depend on the stars aligning for the WWE universe. First Bill Goldberg needs to be in the good graces of the fans. Which is easier said than done, just look at the Minneapolis fiasco. Second, we also have the issue of The Undertaker's health and if he could really do one more grueling WWE match.

Lastly, how sure are we that the whole Brock Lesnar vs. Bill Goldberg match would not be a bad affair? Let us recall that last time this two tangled was not something fans would remember for a long time. So if the Undertaker match is going to happen, Brock Lesnar and Bill Goldberg needs to put up at least a decent match.

If these conditions are met, then fans could look forward to an incredible event and witness a fitting send-off to one of WWE's most cherished and beloved superstar.

In other WWE related news, future Hall ofFamerr Randy Orton is rumored to miss the Survivor Series event. The reason is not injury related but more of a personal nature. His wife is about to give birth and would most likely miss the entire month of November for the momentous occasion.

The last big rumor making the rounds is that Seth Rollins and Triple H are rumored to start a feud just in time for a big Royal Rumble. Sources say the WWE is looking to make the Rumble an even bigger event by involving these two.

With all these rumors swirling around, it sure is a great time to be a WWE fan.

It looks like WWE CEO Vince McMahon still won't let Kurt Angle back in the ring. Furthermore, his seems to be in such a bad mood after Brock Lesnar's Raw segment.

WWE News: ‘Elimination Chamber’ To Return On February; Three Legendary Superstars Will Comeback In The Next Months

One of the most iconic structures in WWE, the "Elimination Chamber," is slated to return in February. Added with three legendary superstars to return, it surely will be exciting.

Brock Lesnar Vs. Bill Goldberg: What Will Most Likely Happen When They Face Each Other At WWE 'Survivor Series'?

The much awaited Brock Lesnar Vs. Bill Goldberg rematch will finally happen at the "Survivor Series." Here's a run-down on what will most likely when they face off.