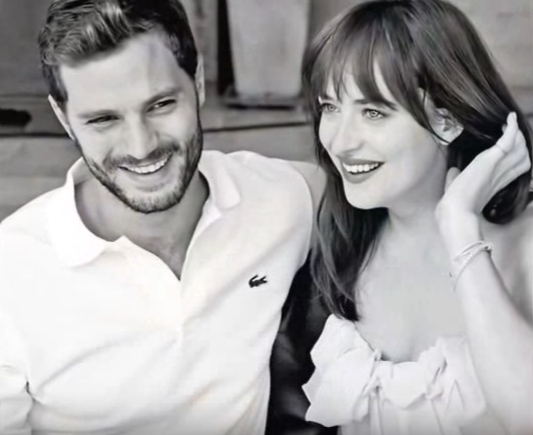 Hollywood’s entertainment industry plays a crucial role in the lives of its stars, both in personal and professional aspects. Fame has a price and hard work is accompanied with controversial rumors. To be tangled in stardom is every celebrity’s greatest desire, however, invasion of privacy is inevitable.

Their on-screen chemistry cannot be denied that even prior to the filming of the remaining installments "Fifty Shades Darker" and “Fifty Shades Freed,” Johnson and Dornan got themselves dragged in a variety of malicious gossips. A report noted of their alleged secret relationship while shooting the intimate scenes required of the famous trilogy. Their situation is also likened to Robert Pattinson and Kristen Stewart’s budding romance in "Twilight" and Hollywood’s super couple Angelina Jolie and Brad Pitt whose love developed on the set of "Mr. and Mrs. Smith."

Despite the continuous denial of Johnson and Dornan about their presumed romantic affair, fans are hard to believe that they can escape the reality of liking each other.

In a report, Dornan was mentioned to be satisfied with his closeness to Johnson. He described his relationship with Dakota as a happy one as evidenced by their getting along with each other well.

“Dakota knows what I’m going through and only I know what she’s going through. We get on very well, we make each other laugh and we’re comfortable with each other, which is very important because Jesus, if I didn’t get on with her… I’ve heard horror stories of that happening. Actors who have to do intimate things with another actor and they just don’t get on… It’s not good,” Dornan said.

It is not unknown to the public that the handsome actor is already married to Amelia Warner and they are blessed with two adorable children. Warner was described as extremely jealous of the intimacy shared by her husband and his leading lady. She is said to be present during the filming of the sequel to ensure that an ugly affair between the two will not come to fruition. Furthermore, Warner was reported to be practically and reasonably protecting her marriage and family in spite of theories that her paranoia and jealousy over Dakota are getting intense.

Another news that stirred the private romance of Dakota and Jamie is the latter’s rumored jealousy on the widely speculated relationship of the former with model Cara Delevingne. St. Vincent’s ex-flame and Dakota were spotted together on special occasions especially when Dakota celebrated her birthday with Delevingne.

Dornan admitted that his family is very special to him and his love for his wife is but unconditional. Now, is there any truth on the speculations linking him to Johnson?

Dakota Johnson left only one photo on her Instagram account that led fans to speculate that Amelia Warner is behind this activity.

Fifty Shades Darker has surprised critics as it surpasses the records of its predecessor, Fifty Shades of Grey.

Psychologists say that Fifty Shades-style sex can greatly boost physical and mental health. Health benefits include lowering of stress levels which could significantly improve quality of health of the couple.

Here’s what Jamie Dornan thought of all the controversies about him.

Twitter Accounts Including Elon Musk and Bill Gates Have Been Hacked