'Imitation' Review: Why You Should Definitely Read This K-pop Idol Themed Webtoon 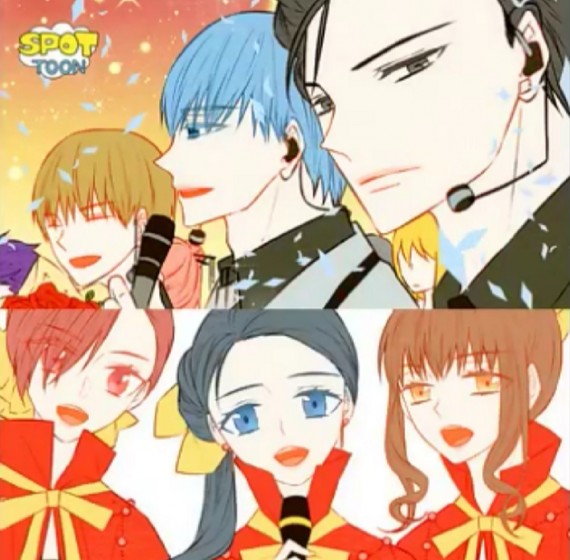 Webtoons are now commonly sourced as Korean drama plots. Recently, MBC expressed their interest to pick up "Cat and Dog," a rom-com series about a girl who had an arranged marriage with a K-pop idol due to an agreement by their grandparents. It would not be surprising if "Imitation" would be the next to be adapted into a drama series or movie. Aside from the fact that it follows the lives of K-pop idols, here are reasons why you should read this webtoon:

"Imitation" written by Park Kyung Ran features Maha Lee, a member of a girl group named Tea Party which debuted from a small company. She had her minutes of fame after she copied a famous idol, La Lima. Ryoc, the leader of one of the most popular boybands SHAX, hated her because of it. One incident led to another and he made Maha cry after insulting her using an adlib while filming a drama. It turns out, Maha is actually a timid girl who barely speaks and her copying La Lima was due to her manager's request. Ryoc couldn't forget her after seeing her crying face and decided to ask for forgiveness. His hate eventually turns to love as he gets to know the real Maha Lee.

From the plot summary above, many may picture Maha Lee as a damsel-in-distress type of girl, but it's not the case. Despite her innocence and longing for love (she was not given attention at their patriarchal home just because she is a girl, to the point her parents don't even know she's an idol), she is quite tenacious. She lands a role in the drama because of her photographic memory; she can memorize scripts after reading them once. And it's endearing how she gives her all in reality shows without minding her image while rolling in the mud. She is so cute Ryoc would rather put her in his pocket.

Other members of Tea Party also have their strengths. Ria has very good vocals that she can be a solo artist while Hyun Ji is very pretty and good in socializing. It is good how the webtoon also shows the inner thoughts of the characters, like when Hyun Ji is having bad thoughts about Maha. It makes them look more like real persons.

Who knew Ryoc's cold heart would melt because of Maha? He is a very cool and unsociable character but it's so funny how he turns to a child when Maha is involved. He gets easily jealous, especially when Tea Party finally gets famous and many guys are approaching her. I agree to this casting idea, BIGBANG's TOP is definitely fit for the role. I like it how SHAX is very similar to some famous K-pop boy bands today. Their maknae Hyuk (he is so short and his features are similar to a girl's) is a real trouble maker to his hyungs.

The characters are well thought out that there are no annoying ones. Idol dramas just like "Minami Shinaeyo" also known as "He's Beautiful" has Yoo He Yi who always bullies Go Mi Nam/Go Mi Nyu. In "Imitation," La Lima was annoyed at first but became Maha's friend and older sister figure after she discovered her personality. Yujin of Sparkling was pursuing Maha from the start. He was a little childish but his character developed to be mature. There are new characters introduced in the second season who would likely be the villains, and it's exciting to see how their characters will turn out.

How do I say it, the series is light-hearted, fun to read yet it is moving (I teared up several times). You will like it especially if you are a K-pop fan as their story is very much similar to your favorite K-pop idols. Currently, "Imitation" is in its second season. You can read this webtoon on Spottoon.

Interesting Sports Mangas That Should Definitely Be Adapted Into Anime Series

Sports series with seemingly weak but actually very skillful heroines are good inspirations. Here are some sports mangas that are good enough to be adapted into anime series.

Must-Read Webtoons And Manhwas That Are Made Into Korean Dramas

Boruto will use his Vanishing Rasengan to help defeat the Otsutsukis and rescue his father in "Boruto: Naruto Next Generations" chapter 7.