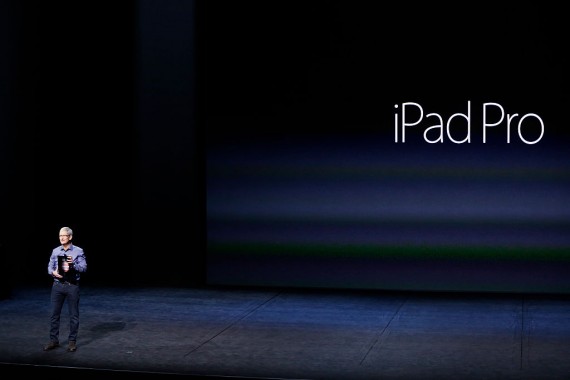 Could the iPad Pro 2 be a success in the market at a time when desktops and laptops are becoming more attractive products to users? (Photo : Photo by Stephen Lam/ Getty Images)

Apple appears to be looking at 2017 with expectations, as it would be the year when the company will release its new incredible devices, including the iPad Pro 2. The device is expected to be an extraordinary tablet that will surprise any single person that buys it, not only for its specs and features, but also for Apple's characteristic way of turning any single device into an aesthetic piece of art.

However, even when the iPad Pro 2 promises to be an undeniable greatness in the tablet world, far from being an imminent success for the company, it will have to struggle a lot to achieve this. For one, it will have to overcome its predecessor, which also happens to be an incredible device, but ended up being a failure.

According to Mac Rumors Apple´s most incredible tablet so far didn't represent even the half of tablet sales, which represented a big surprise for everyone giving the fact that even when the company´s philosophy is to maintain its business model in the high-margin territory, the standard scenario would have been the iPad Pro turning into the real deal in the market.

Many users believe that the main reason for this situation was that it prices it wasn't precisely cheap, and the features were great but not incredible enough for people to buy it without second thoughts. However, the biggest problem that this device has to face, and the iPad Pro 2 will have to fight as well, is the waning interest in tablets, since laptops and desktops are becoming way more attractive to users.

What Can Apple Do With The iPad Pro 2?

Given this fact, the iPad Pro 2 is not only facing a price issue but also a general tendency that could represent an incredible danger for Apple, considering that the new tablet could end up being an incredible failure. However, the company is still betting a lot on this new device and might overcome this situation in a different way.

First of all, the iPad Pro 2 will come with Apple´s name, which is attractive enough for encourage a significant number of people to buy the tablet without any problem. On other the hand, it has been known that the company will make some changes in order to make the product as mind-blowing as possible.

For example, it has been rumored that the iPad Pro 2 could have a better camera and battery life than its predecessor, which would make this tablet way more fun and interesting to users, since one of the main problems that this product has faced over the years is precisely these two features, considering that users demand better photos and more durability.

Another rumor has been that the company will make iPad Pro 2 water resistant just as the iPhone 7, which represent the unbeatable strategy of using in a new product some features of other that has been successful. In fact, comparing the new tablet with Apple´s latest phone could be extremely beneficial as long as is released before the iPhone 8. According to Mac World, this will be in March, while the new smartphone is expected to be released in September.

However, the most important strategy that Apple has to use in order to make iPad Pro 2 another successful product is to justify its price with specs, features and a design that turn the ordinary into something beautiful. This is precisely what the company is allegedly doing, by developing three different size models that comes in 9.7-inch, 10.5-inch, and 12.9-inch variations.

The price is estimated to be from $600 to $800, and it is possible that even when people are buying more desktops and laptops, the iPad Pro 2 could end up being one of the most incredible products that we see next year in the market. Let´s just wait some months.

Lamborghini Alpha-One Is A Luxury Smarphone Costs $2,450, Does It Worth?

Lamborghini has launched an Android-powered smartphone namely ‘Alpha-One,' which is priced at $2,450.

iOS 11 beta 2 introduces a long list of bug fixes to address issues that were discovered in the first beta of iOS 11, and registered developers should read over the extensive release notes to get an idea of what's been fixed.