Will Technology Make Or Break The 2016 US Presidential Elections? 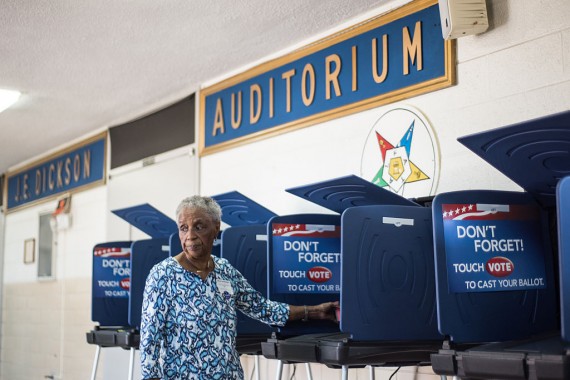 If its used correctly by politicians, technology could represent a new tool in which candidates would spread their statements and accusations. However, it is not clear if this could make elections safer for voters. (Photo : Photo by Sean Rayford/Getty Images)

In addition to Donald Trump and Hillary Clinton, the most important actor in the 2016 U.S presidential election will be technology, considering that social media and electronic voting machines are the two powers that will determine who will be the next chief of the United States.

Given this enormous dependency, the big question is if this event is going to be a success or a failure, considering that a single error could mean an unpredictable chaos. That is why here´s a short analysis of how technology could make or break the 2016 U.S. presidential election.

First of all, it is important to explain that this kind of event is always more related to emotions than rationality, considering that for a voter, determine the outcome of an election is connected with which candidate ended up being elected, and giving the fact that Trump are Clinton are not precisely the best exponents of both Republican and Democratic Party, and yet, they were elected.

Another exemplification of how the 2016 U.S. presidential election is completely attached to emotions is the social media, whose influence in this event has been more important than any single action or statement of both candidates. This is because these platforms have become the place where the majority of people get informed about anything, with the risk of receiving false or manipulated information, considering that the social media doesn't have an editor or a filter that could eliminate any news or statements that doesn't correspond to the truth.

Between both candidates, the one who have played better its cards on social media has been Donald Trump, driving up anger to push voters to trust him and vote for him, in a manner that even when analyst explained a thousands of times that he wouldn't even get elected as the Republican nominee, the business men could become the next president thanks to the way he used these platforms, as reported by The Telegraph.

His actions on social media are the best exemplifications of how these can become new tools for politicians to make their moves, because at the end of the day, things as demagoguery or nationalism are political styles that have been used since day one. However, a candidate must be careful in social media, since a little mistake could destroy their aspirations to become presidents.

Is this something that makes or break the 2016 U.S. presidential election? None of both, because making false statements or accusations to harm or increase a candidate´s popularity has been done a lot of times throughout the history. The only difference is that the information gets infinitely more spread with social media, which also could be something great if we´re talking about accurate and responsible messages.

Although it has been said that this kind of voting system is way more comfortable and easy than old-school manual voting, less than a week before the 2016 U.S. presidential elections it seems like a huge threat to voters, giving the fact that the electronic voting machines are not precisely the safest devices on earth.

In fact, this is something that reaches a whole new level of insecurity, considering the cyber strikes that have been made initiated across the world this year and the certainty that the electronic voting machines could be an easy target for hackers. As might be expected, this could create a massive chaos for voters, with unpredictable consequences.

According to Wired "most of these machines are running Windows XP, for which Microsoft hasn't released a security patch since April 2014. Though there's no evidence of direct voting machine interference to date, researchers have demonstrated that many of them are susceptible to malware or, equally if not more alarming, a well-timed denial of service attack."

Although three-quarters of the country will vote on a paper ballot for the 2016 U.S. presidential election, those who will vote in the electronics machines represents an important number that could harm the elections if the machines are cyber attacked, which is not an impossible scenario considering the DNC hack.

This is definitely the biggest threat that the 2016 U.S. presidential election is facing, and it will definitely represent one of the worst moments in the U.S. history if the biggest fear became reality. Sometimes, technology can solve a lot of troubles and create new ones at the same time.

Top 5 Instances When Social Media Played A Part In History

How different would many historical events be if social media hadn't existed in those times?

Clinton vs Trump: Top 3 Social Media Mistakes In The 2016 US Presidential Elections

Considering the level of these cases, it seems impossible that there could be more embarrassing posts of both candidates before the elections.

NO Trump Or Clinton In 'American Horror Story' Season 7

Stopping dream-casting Donald Trump and Hillary Clinton. While American Horror Story Season 7 will tackle the 2016 presidential election, Ryan Murphy has now explained that the former presidentiables will not be featured on the show.

Around 600 people were arrested after the implimenatation of President Donald Trump's 'Immigration Ban'. Details inside.