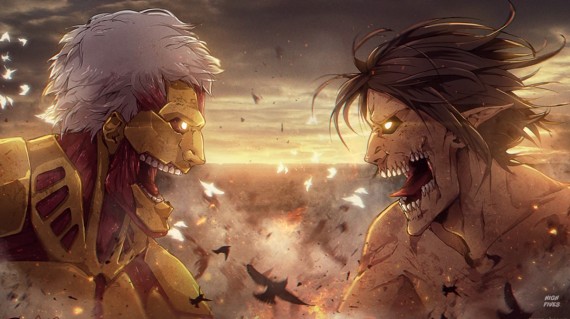 Since the day it was announced that "Attack On Titan" Season 2 will be on its way, fans have been theorizing non-stop as to what will unfold in the upcoming installment. Recently, reports have surfaced online claiming that the sequel will introduce Eren's half-brother, Zeke and reveal the secret behind Dr. Yeager's basement.

The Mysterious Basement Of Dr. Yeager

In the manga version of "Attack On Titan," the mysterious basement of Eren's father, Dr. Yeager, has been finally explored. It can be recalled that in chapter 85 of the hit manga series, Eren and the remnant of the Survey Corps made their way inside the basement. There, they find hidden journals written by Dr. Yeager himself. The contents of the journals were unclear but Eren discovered a photograph with it.

The interesting part of this discovery is that they're not supposed to have those in the "Attack On Titan" world since they don't have that kind of technology yet. This leads to many speculations that Dr. Yeager might come from a more advanced community.

If the anime version will follow the same plot as to the manga, fans can expect to get more answers when Eren and the rest of the group investigate the basement. Many believe that Dr. Yeager's basement holds the truth behind the titans so it'll definitely be explored at one point in the series.

With Eren's exploration of his father's basement, many speculate that he will also unravel the truth behind his family including his half-brother Zeke and Dr. Yeager's second wife. It has been reported that Zeke will be further introduced in "Attack On Titan" Season 2. Others also speculate that a face-off between the brothers will take place as well, considering that both Eren and Zeke are titans.

Zeke, also known as the Beast Titan is considered to be the strongest member of the Eldian warriors. In fact, he was responsible for the death of many soldiers in the Survey Corp including 13th commander Erwin Smith. His character was first seen within the Wall Rose where he transformed the people of Ragako into Titans.

Eren's half-brother has the ability to transform himself into a Beast Titan and retain his human mind at the same time. This makes him do tasks not typical to other titans like speaking. However, it remains unclear as to how he acquired his power.

Despite very little interaction between Eren and Zeke, it was speculated that in "Attack On Titan" Season 2, the two will finally meet as brothers. There were even claims that Zeke will try to reach out to Eren, convincing him that he understands him given that both of them were victims of their father's brainwashing. It was even reported that Zeke will promise Eren that he will come save him someday.

As of this writing, there has been no confirmation about the said rumors. It's still best to wait and see what "Attack On Titan" Season 2 brings on the table when it returns, hopefully by spring of 2017. For now, check out the unforgettable moments in the series below.

'Attack On Titan' Season 2 Spoilers, News And Updates: Survey Corps To Lose Another Asset; Armin To Step Up After Almost Getting Killed?

"Attack On Titan" Season 2 is expected to feature another death in the Survey Corps. This time, it's Chief Erwin Smith who has to go.

"Attack On Titan" Season 2 Episode 1 will allegedly unveil Dr. Yeager's locked basement. What will Eren and the remaining Survey Corps discover in the mysterious room?

"Attack on Titan" Season 2 continues to tease fans with new possible plots set to be unveiled next year.