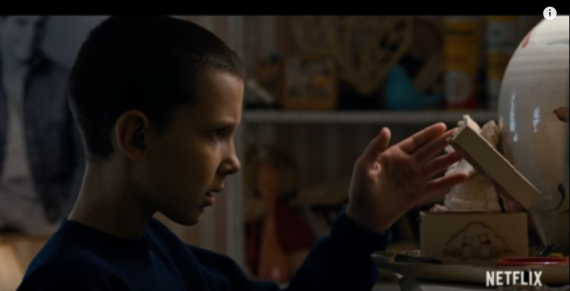 Netflix has been a vital part of one’s everyday life, but what are the best of the best series to watch there? (Photo : Photo by Netflix US & Canada/Youtube)

Netflix makes you watched tons of series that are really interesting and thrill-seeking.Fans from all over the world are so hooked to it. Now, the real question is this: with all the lists that you could choose from, which one is the best?

A story somehow related to the masterpiece of Steven Spielberg and John Carpenter. This hit series Stranger Things was created by Duffer Brothers. It is a great mix of suspense and drama suited for kids and adults.

The series revolves around a boy named Will who was allegedly captured by a creature different from human and is bound to live in other dimensions. His mother would then look out for solutions that would help find her loving son. On the other hand, Will's best friends would also look out for ways to find him but instead they would meet a girl with telepathic powers named Eleven. The investigation regarding Will's disappearance continues. With this, who could be the prime suspect? Would there be someone to blame?

According to Digital Trends, Breaking Bad involves a high school teacher named Walter White, played by Byran Cranston, who eventually was revealed to have a lung cancer. Scared of what could happen to his family's future, he used his expertise in chemistry to form and deal premium blue meth with former student Jesse Pinkman, played by Aaron Paul. The story is packed with moral lessons regarding family and personal life. It is described as addicting figuratively and literally.

As stated in Uproxx, Crazy Ex-Girlfriend is a musical take of a woman who decided to leave her well-established life in the city of Manhattan to win and follow her ex-boyfriend to a town in California. The show is tagged as unusual as it promises a unique take in a series. The story, at first, would look simple but as episodes has gone by it would lie beneath a dark and subversive situations of each characters. The series also includes songs with lyrics relating to depression, insecurity and work-life balance.

4. Orange Is The New Black

The story, unlike any other series, is based on a true and original story, the series follows the life of Piper Chapman as she turns into a prisoner from living a middle class-life real quick. She was convicted of committing crime relating to drugs. The show, although funny, is based on the real life of Piper who was able to write her life behind the bars. The series would offer you a roller coaster ride as it gives you mixed emotion from one episode to another.

If you are looking for a real thrill and adventure in a series, The Walking Dead is a must-watch. The show revolves around the survival of men amidst a crowd of zombies surrounding them. The story started with the life of Rick Grimes, played by Andrew Lincoln, a deputy who met a great amount of survivors after zombies approached the world. The series would keep you interested and craving for more of the it.

It seems like Marvel has done a great job in its production of Doctor Strange.

With all the celebrity couples parting ways this year, who were the most controversial and the real talk of the town?

Executive producer Shawn Levy of "Stranger Things" has revealed that Barb won't be coming back to the Netflix show and explained why.

Marvel and Netflix series "Luke Cage" has finally began filming for the second season and new teasers featuring Mike Colter and Rosario Dawson have been released.