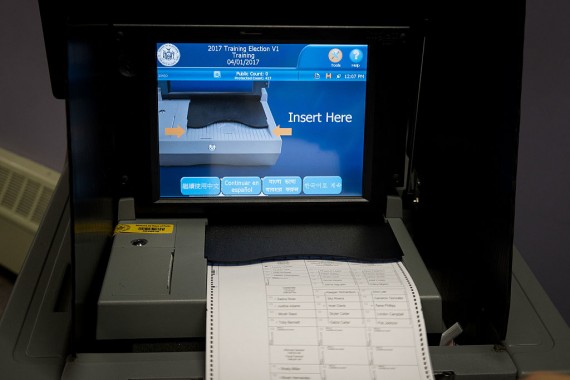 A view of a ballot scanner at a New York City Board of Elections voting machine facility warehouse, November 3, 2016 in the Bronx borough in New York City. (Photo : Photo by Drew Angerer/Getty Images)

Cybersecurity researchers are raising the specter of a Russian cyber attack on Election Day and many voters are concerned that the presidential election could be hacked after Russia's recent hack of the Democratic National Committee.

Will Russia Hack The Election?

In a joint statement released last month on DHS' official website, the Department of Homeland Security and the Office of the Director of National Intelligence explained that the odds of hacking the election are not very high. The two security agencies said that altering the actual ballot counts or election results by the means of an intrusion or cyber attack would be extremely difficult even for a nation-state actor.

What Protection Measures Are In Place?

According to The Wrap, the confidence shown in the statement by the security agencies credits the number of protections local and state election officials has in place as well as the decentralized nature of the U.S, election system. In the case of targeting by hackers of any election system used across the country, the voting machines would be disconnected of from the internet. Each system is furthermore determined locally by individual counties and states, therefore it would be really difficult for meddlers to change the results of a national election.

Pamela Smith, president of the non-partisan lobbying group Verified Voting, explained for the same publication that the U.S. doesn't have a national voting system but rather local jurisdiction-specific voting systems. On the international scene, there were indeed some elections that have been tampered with over the internet, but that could happen only where there's been a national election system. That's not the case of the U.S.

However, individual local results could still fall victim to tampering. Andrew Appel, a Princeton professor and member of Verified Voting's board of advisors, has declared that hacking electronic voting machines is very easy. In fact, not only the voting machines themselves can be hacked but also the desktop and laptop computers that are used by the election officials to prepare voter registration, electronic poll books, the ballots and the electronic files from the OpScan machines.

In an interview with Politico Magazine, Appel said that the election would be significantly disrupted in case that any of these systems get hacked. Some even wondered if last month's massive DDoS attack may be a mere rehearsal for a destructive Election Day attack. A likely scenario is a voting machine error leading to an incorrect result.

Local officials take precautions to ensure the accuracy of the election results, including a pre-election voting machines check, as well as a post-election audit in most states. But even if a technical error could not affect the outcome of the 2016 presidential election because the voting process is too decentralized, experts warn that the real danger is the uncertainty. It is necessary to maintain a certain level of confidence.

Denise Merrill, the president of the National Association of Secretaries of State and the Secretary of State of Connecticut, told Time that these elections will be fair. But in order to ensure these fair results, there might be more hurdles and it might take longer to count every vote. However, state and local officials have paper-based backup plans in place, in the event that hackers attack voting systems.

Over 840,000 Cisco Devices Are Exposed To NSA Exploit Cyberweapon

Cisco customers are at risk due to the NSA vulnerability exploit.

The Asus ZenFone 4 max was recently unveiled in Russia and it impressed with its dual cameras and mammoth 5,000mAh battery.

Google Agrees To Open Apps On Android-based Devices in Russia

Google has promised to Russia's Federal Antimonopoly Service that the company will allow rivals' search engines and apps to be pre-installed on smartphones running its versions of Android in Russia.

The Russian Terminator robot is shown to be able to shoot guns with both hands. It can also drive a car and do press-ups, making people nervous despite Putin's assurance that the violent exercises are just part of the machine's decision making and coordination training.

There are numerous advantages that come with becoming a franchisee including the opportunity to capitalize on a brand that has already been well-established.