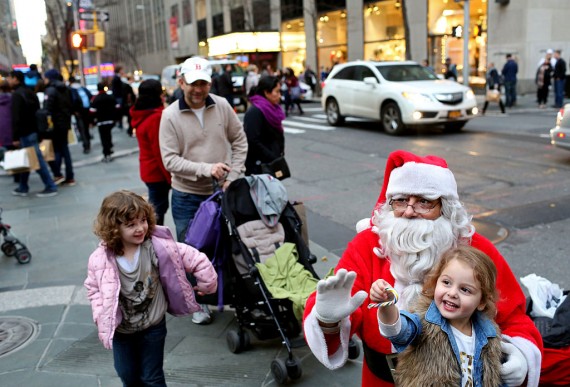 This year's Black Friday 2016 is the best yet for gamers. Start shopping for the best video games and consoles deals available on stores - online or not. (Photo : Photo by Yana Paskova/Getty Images)

The day after Thanksgiving, Black Friday will be here. It is one of the best times of the year to buy yourself or a friend or a close family something. But skip on the toys and the Christmas decorations. Head on to buy some good electronics, great gaming system bundles and video games. Ready for Black Friday shopping? Here are the best video games and consoles deals that you should watch out for this Black Friday 2016.

It will still be weeks before Black Friday comes in. But that does not mean that you have to wait long to enjoy Black Friday deals. TechRadar predicted that this year's Black Friday would be the "biggest day of spending of all time." But that would still depend on a great number of factors. What's for sure is that if Argos is going to give a PS4 deal at £150, which is roughly $187. Then Amazon and other major retailers out there are likely to offer a similar deal. It's a lot cheaper from the original PS4 Slim price of $299.99 and it's a sure way for gamers who wish to shop and save on their hardware to buy their own.

Target also offers one free board or video game when you buy two from their stores. Sam's Club and Dell also offer savings on console bundles like PlayStation 4 Slim and Xbox One S bundles with laptops for Dell. They also offer discounts for video games like Battlefield 1 and Gears of War 4. Other shops to explore for the best Black Friday deals include Best Buy, Walmart, GameStop and even Sony's own PlayStation Store.

A wide variety of games from sports, shooters, racing, adventure and fighting are also likely to become available on Black Friday deals especially with the release of the PS4 Slim and PS4 Pro. For sports video games, FIFA 17 is likely to hit a good deal as well as 100ft Robot Golf and WWE 2K17. For racing games, some popular titles include Gran Turismo, Driveclub VR and WRC 6 FIA World Rally Championship.

Roleplaying games are also likely to become popular like the Final Fantasy series so seeing the Final Fantasy XV out on sale during the Black Friday 2016 deal is no surprise. Star Trek Online is also another popular title together with Elder Scrolls Online and Neverwinter. For more adrenaline games, you should check out titles like Dragon Ball Xenoverse 2, Titanfall 2, Call of Duty: Infinite Warfare, Battlefield 1 or The Last Guardian.

Black Friday 2016 will officially land on Nov. 25, a day after Thanksgiving. For more tips and shopping secrets, watch out the video below and get yourself some of the best deals for the holiday seasons.

Gamers will definitely enjoy November with the release of some of the big and most-awaited games in gaming history.

Titanfall 2 Has PS4 Pro Patch Support On Disc, But It's Not Native 4K

Respawn Entertainment has finally announced that Titanfall 2 will be available on PlayStation 4 Pro with a support patch available on disc. However, the title is not likely to run in native 4K.

Which Games Are Getting The PlayStation 4 Pro 4K Upgrade Patch?

With the PlayStation 4 Pro upgrade patch, gamers will enjoy better visuals and higher frame rates, which is the best that 4K resolution gaming has to offer right now.

According to the latest news, Titanfall 2 War Games update is now live. This update brings a lot more content that is designed to improve the players’ gaming experience.