WWE News: Hulk Hogan Vs. Undertaker Plus More Possible Opponents Of The Hulkster At Wrestlemania 33 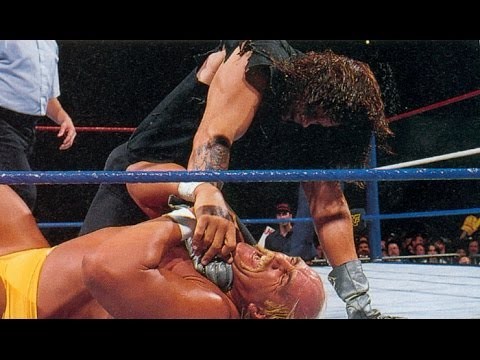 Things are looking up for the WWE fans as Hulk Hogan will come back at Wrestlemania 33. Could the Undertake be his next opponent or someone else? (Photo : WwePers/Youtube)

The WWE is looking to patch things up with Hulk Hogan with a possible return at Wrestlemania. And things could get really big as there are already rumors of possible opponents for the Hulkster including John Cena.

According to an interview, Hulk Hogan's daughter, Brooke was quoted as saying that WWE has been trying to get in touch with Hogan. This is what she had to say exactly:

"I'll just say I know that people have been calling him...for WrestleMania."

That is definitely big news. As you might remember, the WWE has cut its ties with the legendary wrestler following a recorded conversation of the Hulk saying some rather tasteless and racist things. Even a public apology from Hulk Hogan was not enough for the WWE as they abruptly severed any ties they had with the wrestler.

Well, it seems like they had a change of heart. Which is something fans should get used to when it comes to the pro wrestling world. To add some credence to this juicy piece of gossip, a wrestling website has confirmed that the WWE is indeed interesting in bringing back Hulkamania to Wrestlemania 33. Here is the exact excerpt from the site:

"Vince McMahon is indeed interested in bringing Hulk Hogan back into the fold. We've been reporting for months the company has been slowly warming back to Hogan to bring him back in order to help market the WWE Network to the lapsed fan. It's inevitable that he will return, it's just a question of when."

If the WWE is indeed successful in bringing Hogan back to the fold, then only one name comes to mind as the best possible opponent; the legendary Undertaker.

The Undertaker and Hulk Hogan has such a long history dating back to the early Wrestlemania. As both men are closing their careers, maybe one final match between the two legends is the ultimate cherry on the top of their careers. Though this bout would not be as electric as their early matches, it would certainly be a fitting farewell to the two individuals who made pro wrestling the smashing success that it is today.

The second superstar that is a good fit for Hogan at Wrestlemania 33 is John Cena. Like it or not, John Cena is probably this generation's Hulk Hogan. A legend from the 80's vs. the face of pro wrestling in the new millennium will make one awesome promo. Expect the crowd to be divided by fans who grew up watching the hulk and kids who just adore John Cena. Although this match looks good on paper, I really don't see a great match happening once they are in the ring.

This match has also been planned by the WWE on its 25th Wrestlemania. The Hulk claims that it did not push through because he suffered an injury and was unable to do that match. Expect the WWE to quickly set this up once the Hulk gives the go signal that he is on board.

Another superstar that the Hulk could tangle with is the fast rising Kevin Owens. Hogan has made no secret about his admiration for the young champion. And because Owen makes such an amazing heel, having Hogan wrestle him at the grandest stage of them all would make great TV.

Wrestlemania will be broadcast n April 2, 2017.

WWE News: The Undertaker Will Finally Return To SmackDown For Its 900th Episode

This is just in! The Undertaker will definitely make an appearance on the 900th episode of SmackDown. Check here for more details.

WWE Rumors: The Undertaker Vs. Goldberg, Randy Orton Not Present In Survivor Series, And More

Lots of rumors and speculations have been swirling around about WWE. Can a Goldberg vs. The Undertaker match be on its way? Plus more rumors on Brock Lesnar, Randy Orton, and the upcoming Wrestlemania.

It looks like WWE CEO Vince McMahon still won't let Kurt Angle back in the ring. Furthermore, his seems to be in such a bad mood after Brock Lesnar's Raw segment.