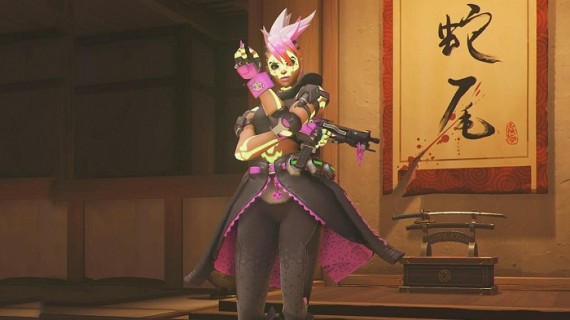 Blizzard has finally unveiled the newest Overwatch hero at BlizzCon. Sombra is deemed as the 23rd character coming to the hit multiplayer first-person shooter game. The studio, however, didn't release any official date as to when the hero will arrive to the live servers. Currently, she's being tested in PTR (Public Test Region). Anyway, lots of players have been wondering as to how deadly the character's skills and ultimate are. Well, if you want to know, better continue reading.

According to VG247, contrary to popular belief, the aforementioned Overwatch hero isn't that really strong. She, in one way or another, still has a couple of flaws to offer. And yes, this despite the fact that the thought of her being able to hack and disable abilities is quite interesting. But then again, not everything applies. Besides, Blizzard has been very vocal about their intentions of making every hero perfectly balanced.

If, for instance, Genji is hacked by Sombra in Overwatch, it's safe to say that he won't be able to utilize his Deflect and/or Swift Strike. If he's also hacked while using the latter (in motion), there's a tendency that the cyborg ninja can't still be stopped -- unless, of course, if the new hero is able to catch him right before he leaps. As for the ultimate skill Dragon Blade, it's impossible to be hacked. That's because it's deemed as a continuous buff, and Sombra is said to have no effect on it -- either using her EMP or the regular hacking skill.

Sombra can't definitely stop McCree's Combat Roll in Overwatch. Heck, it's even impossible for her to prevent that Flashbang from dropping or taking effect. But as for his Deadeye, there's a possibility especially that it requires a specific amount of time when casts.

First off, there's no way that Sombra can stop Pharah from flapping its wing into the sky in Overwatch. But of course, since the Jump Jet is somehow mechanical, the hero can possibly stop it from working. The hacking won't take effect, however, on the Concussive Blast. While Barrage can be hacked and EMP'd, it's also possible for Sombra to take full damage.

When in Wraith form, Reaper can't be hacked in Overwatch. His teleport, though, is very possible. Sombra, if in one way or another, is able to catch him just before the animation starts, it could be likely. Reaper's ultimate Death Blossom can be hacked, too.

Whenever Soldier 76 is hacked by Sombra in Overwatch, sprinting will be impossible to perform. The same thing will happen to his Helix Rockets and Biotic Field for healing. The ultimate, on the other hand, can't be hacked.

If Bastion is hacked in Overwatch, he's likely to lose the Turret form (you know, that machine gun thing). Hence, he'll go back to his normal form. The same can happen to his self-healing ability called Self Repair. As for the ultimate, nope, it can't be hacked.

To check the other heroes Sombra can hack and/or not in Overwatch, go straight to VG247's page.

What are your thoughts on Sombra as the new character in Overwatch? Are you excited to use her? Be sure to share us what you think at the comment section below!

It seems Sombra is just a beginning to many Overwatch heroes (as well as new maps). Here's what Blizzard plans to do!

Wondering why Blizzard didn't perform well in all of the Overwatch ARG of Sombra? Well, here's why!

Wondering what Sombra can offer to Overwatch in the battlefield? Well, here's a breakdown of her skills.