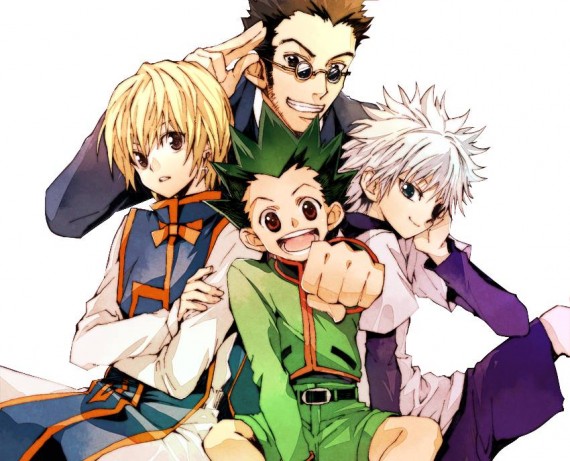 "Hunter x Hunter" is still in hiatus and it creator, Yoshihiro Togashi has been rumored to be replaced by "Tokyo Ghoul" creator, Sui Ishida. Is there any truth to that? (Photo : Opluffy/Facebook)

Following reports that "Hunter X Hunter" creator Yoshihiro Togashi was spotted looking healthy, many speculate that he is now ready to end the manga's hiatus. However, new reports claim otherwise. Apparently, producers had enough of his long break and decided to take the matter into their own hands. Check out the details below.

It can be recalled that the "Tokyo Ghoul" creator expressed that he is a huge fan of the famed mangaka and its creation, particularly Hisoka of "Hunter X Hunter." In fact, his admiration for the said character led the manga's editors to be curious about Sui Ishida's own version of Hisoka. Yoshihiro Togashi tagged along with the idea, eventually allowing Sui Ishida to draw a colored version of the lethal anti-hero. The said chapter also commemorated both "Hunter x Hunter" Volume 33 and "Tokyo Ghoul:re's" seventh volume.

With Sui Ishida's experience in illustrating for "Hunter X Hunter" and even getting high remarks from its original creator, he might be the best candidate to continue the job. Will he be able to match Yoshihiro Togashi's artistic skills?

Although the idea sounds good, it's too farfetched. First of all, Sui Ishida has a full plate right now. He is currently facing intense workload with his "Tokyo Ghoul" franchise and fans are getting impatient waiting for its release. The creator definitely doesn't have the luxury to add another workload to his already hectic schedule. Second, if Yoshihiro Togashi will be replaced, they should have done it a long time ago. Time is of the essence - unless you're waiting for someone worth the time, like the "Hunter X Hunter" creator.

Aside from Sui Ishida, another possible illustrator that was being linked to "Hunter X Hunter's" continuation is Yoshihiro Togashi's wife, Naoko Takeuchi. Many speculate that she will be fit to take the job since she has the closest relationship with the infamous manga artist. Working with him will be a lot easier as they can both take criticisms openly.

Naoko Takeuchi is also a known manga artist herself. Some of her notable works include "Codename: Sailor V" and "Pretty Soldier Sailor Moon." The 49-year-old artist also has numerous awards under her belt including 2nd Nakayosahi Comic Prize for Newcomers for "Yume Ja Nai No Ne" and 1986 New Artist award for "Love Call."

Yoshihiro Togashi's wife is also the artist behind the global hit "Sailor Moon," which recorded a total of 35 million copies and nabbed the Kodansha Manga Award. With all of her accomplishments, one would think that she is definitely the answer to "Hunter X Hunter's" seemingly endless hiatus. However, no confirmation has been made regarding her alleged takeover of Yoshihiro Togashi's place.

So far, "Hunter X Hunter" remains to be in the dark, waiting to be picked up by Yoshihiro Togashi. It remains unclear whether the replacement rumors are true. But one thing is for sure, every manga artist has its own flair. Replacing one will definitely change the entirety of the manga. Is replacing Yoshihiro Togashi worth the risk? Or is he worth all the wait?

"Hunter X Hunter" creator Yoshihiro Togashi seems to end the hiatus soon as the creator was spotted looking fit to work again in a recent event. In addition, it was reported that the famed manga artist already finished 24 chapters for the series.

"Hunter X Hunter" creator Yoshihiro Togashi was spotted looking healthy as he made a rare appearance in public during 'Kochikame' Anniversary celebration.

"Hunter X Hunter" Chapter 361 remains to be in hiatus as Yoshihiro Togashi remains to be unfit to finish the task. Will his wife be able to continue where he left off?

"Tokyo Ghoul" Season 3 is still MIA sparking speculations that it was already canceled. The live-movie adaptation though is well underway and will be having an advance screening next month in L.A. during the Anime Expo 2017.

"Tokyo Ghoul" live-action movie is coming out on summer in Japan and a trailer is recently released showing Ken Kenaki transforming from a normal boy to a half-ghoul. Meanwhile, the anime's third season remains to be up in the air as rumros have it that the live-action movie is causing further delay to the series.

Social media network Twitter is now letting its users disable replies to their tweets. Is this a good or bad thing?