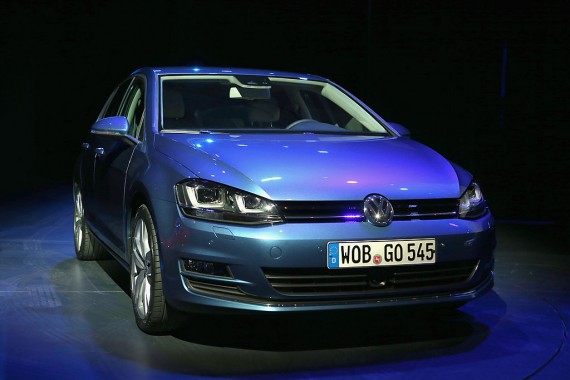 German automaker Volkswagen’s finances have been suffering since the TDI scandal that was discovered in 2015. The VW group reveals the new Golf as part of their plan to correct their mistakes. (Photo : Photo by John Moore/Getty Images))

Volkswagen has been suffering financially after reports of a cheat device were found on their TDI diesel engine in September 2015. They are attempting now to gain the consumers trusts back with an updated version of their hot hatch, the VW Golf. They announced that new one is going to be an updated version of the current Golf and that it contains more features than before.

The Fallout Of A German Company

The company was founded in 1937 and was known for its precision German engineering and unparalleled build quality. The iconic Volkswagen Beetle is one that sets the VW brand apart from the rest, as some Beetle's as old as the 1960's can still be seen on roads up 'til today, a feat that other car brands have not been successful with. These old but reliable cars can be found on streets all over the world still serving its loyal owners.

However, Volkswagen cannot help but get their brand tarnished when they admitted to installing a "defeat device" to their Touareg TDI and Audi Q7 TDI units. Volkswagen is already being fined with nearly $15 billion dollars in settlements and recalls. Sales have also been declining and may not look good for the Volkswagen group unless they come up with a permanent solution to pull back consumers.

On November 10, Volkswagen launched a new version for the Golf in an attempt to regain its stature and to give back to the consumers. The new VW Golf is the seventh generation and will have new features such as a fully digital dash and an infotainment system that enables gesture controls technology. The new features are part of a design to increase competitiveness in preparation for a totally new Golf that is scheduled to be unveiled in 2019.

It is, however; still not clear what technologies will be included in the North American version. What is currently known is that the U.S. version will have a new body design, new front and rear bumpers, newer LED headlamps and Led taillights. VW targets the changes to be implemented on the 2018 U.S. version of the Golf.

According to Autonews, the Golf is still the highest selling vehicle of Volkswagen, Sales have already reached 33 million since its initial release in1974 and that nearly 2000 cars are still being built daily in their factory at Wolfsburg. However, Golf's scheduled to be released in the European market in February may still suffer the loss as research companies are expecting sales to go down by about 14 percent.

VW's brand chief executive, Herbert Diess, explained that although the company is facing big challenges, the new Golf still stands for a new beginning and a new momentum. One senior officer also mentioned it is undeniable that cost discipline has become the name of the game at VW.

Volkswagen and the VW Group may face challenges and may have made a big mistake with their recent scandal, but the people still cannot deny that the German brand is one of the most experienced and reliable in the automotive business. As long as no other scandals emerge, Volkswagen enthusiasts can be sure that the company will climb back up with ease.

Volkswagen Just Revealed The 2017 Golf: What You Need To Know From This Small Hatch

Volkswagen’s hot hatch just received a facelift, new lights, additional engine options and a more functional infotainment system. The 2017 Golf just got announced and it looks better than its predecessors, in a small way.

VW Automotive Group may lose a ton of money as they recall more of their diesel vehicles.