Why Google Bets Voice-Powered Devices Are The Future Of Computing? 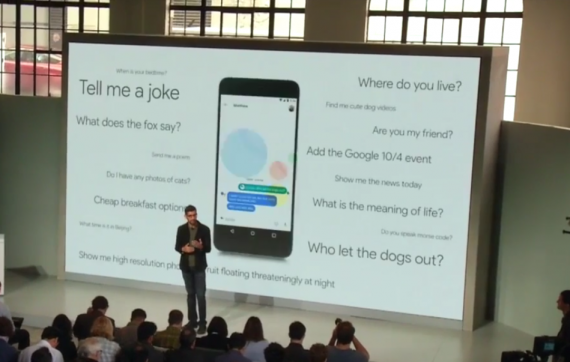 Google has unveiled its new Google Assistant at an event on Oct. 4. (Photo : Pocketnow / YouTube)

Google is betting on voice-powered devices as the only way we'll be computing in the near future.

The Future Of Computing

According to Business Insider, Google Venture investor M.G. Siegler says that the use of artificial intelligence-powered devices like Google Assistant and Amazon Echo shows where the tech industry is headed. Most users might still feel a bit strange talking to a computer, but this futuristic artificial intelligence (AI) technology is fast becoming the norm. According to Siegler, it might take a while for older generations to adapt, but for younger generations and kids with an Amazon Echo, talking to Alexa "it's like their favorite thing in the world."

Siegler compared this emerging technology of voice-powered computing to the rise of using mobile devices. Computer technology originally started with a mainframe server. The miniaturization process allowed to later become a desktop computer, then a laptop and eventually a mobile phone.

Siegler said that the way we now interact with computers is not really natural. When we communicate with one another we talk. Computer user interface should evolve from typing and taping on a screen to using voice-powered devices and talking to computers. This is an inevitable process and investing in this kind of voice-powered technology is a question of timing.

With its new hardware products, Google's parent company Alphabet is already betting heavily on the verbal computing. In October, the company unveiled its Google Home device, first hardware device to incorporate the company's new digital Assistant. The Assistant is powered by artificial intelligence (AI) and responds to user's voice, much like Amazon's Alexa. The Google Assistant is also available on company's Allo chat app and new Pixel phone.

According to Forbes, the market for personal assistants that provide conversational user experience is becoming highly competitive. While Amazon has launched its next generation Echo Tap and Echo Dot, Google is aiming to make a smarter Assistant.

According to Google, developers will have the possibility to create for Google Assistant starting December, similar of developing Alexa Skills for Echo. Google will instantly open up multiple channels to developers by enabling them to target its Assistant platform Google. By using a variety of devices with embedded Assistant technology, developers will be able to reach millions of consumers.

In case of Microsoft's personal assistant Cortana, the APIs are not broadly available. This means that for developers targeting Windows platform their reach is limited.

Google has a multi-pronged approach when it comes to winning the niche personal assistant segment. The high-tech company is counting on all its assets in order to ensure that it creates superior technology to the competition.

According to Google's product page, its Cloud Platform comes with a broad mix of services and machine learning tools. They range from speech recognition to image processing and text analysis. For Google machine learning is certainly its strength.

Developers will be able to instantly perform entity, sentiment and syntactic analysis by sending plain text to Cloud machine learning. Those developers targeting global audience will benefit by Google's support for multiple languages, including some of the Asian languages such as Chinese.

Google is working on a more personalized version of its intelligent Google Now application.