NVidia CEO Is Also Impressed With The Nintendo Switch; What This Could Mean For The Gaming Industry 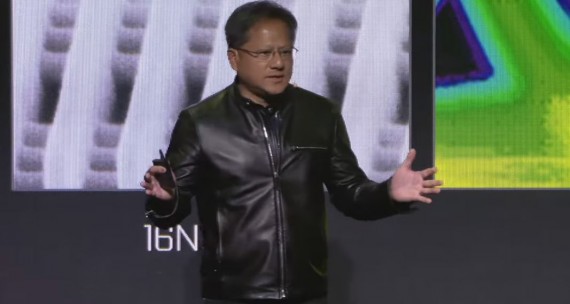 Jen-Hsun says that the gaming console is delightful and will blow people away. He, however, specified that it has nothing to do with artificial intelligence. (Photo : YouTube / NVIDIA)

It's not only Ubisoft's boss that adores the Nintendo Switch. Earlier, NVidia's CEO is also happy about the handheld-console hybrid. At this point, I start to think that maybe Nintendo's upcoming device is going to be a hit after all. With a couple of big bosses from big companies backing up the product, it is now deemed as promising.

NVidia's CEO, Jen-Hsun Huang, had a dialogue with Venture Beat about what he thinks about the Nintendo Switch. It was announced that the handheld-console hybrid is to be packed with Nvidia's custom Tegra chip, which is surprising since NVidia has been only known for PC gaming.

On the interview, Huang said that the Nintendo Switch has a "ground-breaking design", performance is also factored in but the energy efficiency and form factor would matter a lot since it is a handheld-console hybrid. Based on his statement below, it is umblemished that Nvidia is indeed impressed with the device and at the same time, they acknowledged the challenges in battery life and whether the device itself is going to be reliable.

"In the case of Switch, it was such a ground-breaking design...Performance matters because games are built on great performance, but form factor and energy efficiency matter incredibly because they want to build something that's portable and transformable."

Huang says that their desired gameplay for the Nintendo switch would be none existent. They put up a team of engineers and creatives that need to constantly huddle to come up with something. The CEO also added "Several hundred engineering years went into building this new console. It's the type of project that really inspires us, gets us excited. It's a classic win-win."

How does this put Nintendo in the gaming device industry?

At this point, I'm thinking that Nintendo and NVidia are working closely and round-the-clock to create a device that is going to be the very best, and no, I'm not talking about Pokemon. Two heads are better than one, so that makes 2 companies hammering in on Nintendo Switch before they decide to release it sounds very promising indeed. I am quite convinced that the upcoming gaming system will be a game changer to the game industry.

On top of this, Ubisoft - a third party game supplier is also very interested about the Nintendo Switch. CEO Yves Guillemot said that the Nintendo NX (that is what it was called back then) will pave the way to getting Nintendo back on track. This also serves as a comeback from Wii U's failure to deliver good numbers in terms of sales.

Today, the PS4 Pro is suffering poor performance days after its release and this is one weak point Nintendo needs to take advantage of. Having people work closely to deliver a masterpiece of a handheld-console hybrid system will surely put Nintendo on top. More Nintendo Switch details will be announced on Jan.27, so as of this writing, I am hoping that it will be all positive for both gamer and game producers. I think it's time for Nintendo to take its throne back in the gaming industry.

What Price Should Nintendo Switch Be At To Win The Console Wars?

How much will the Nintendo Switch be when it comes out next year? Will it be affordable and at the same time perform well? Or will it be an outstanding device but comes at a price?

Nintendo Confirms Wii U To Be Discontinued, Time To Invest?

Retro games are becoming a hype, the Wii U is stopping production. Wii U will be retro soon with the rapid advancement of our consoles. So should we invest now?

Ever wondered why the latest Pokemon games are named after stones such as Diamond, Sapphire, Ruby, etc.? Read on to find out the creative team's answer as to why they named them Pokemon Sun and Moon.

Having A Hard Time Playing Ninjala? Here Are Some Tips To Easily Win Against Your Foes!

Ninjala is an online action battle game that features ninjas and gum developed by GungHo Online Entertainment for the Nintendo Switch. Here's how you can become better and win more frequently!