SpaceX Launches Global Internet: Will This Be The End Of Local Internet? 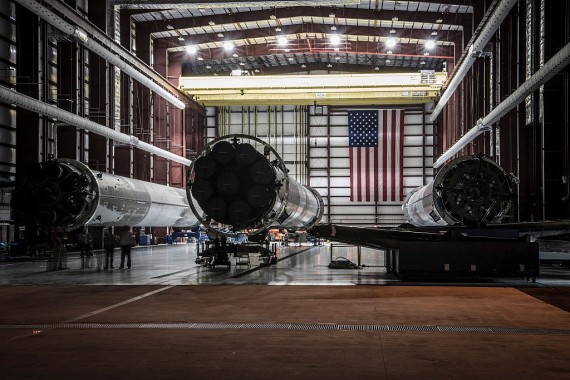 In this handout provided by the National Aeronautics and Space Administration (NASA), landed SpaceX rockets sit in Launch Complex 39 at the Kennedy Space Center on May 14, 2016 in Cape Canaveral, Florida. (Photo : Photo by NASA via Getty Images)

Deny it or not, it is a fact that the Internet is an irreplaceable tool in our lives. For most people, not being able to use the Internet for a day is a nightmare, especially when your livelihood or career depends on it. This is why tech companies such Elon Musk's SpaceX has been working on global internet access.

According to a written article at BBC, private rocket firm SpaceX has applied for government permission to launch satellites that will provide global broadband internet access. In a filing to the US FFC (Federal Communications System), the company has laid out its plans for a 4,425-strong satellite network that will be launched. Currently, the SpaceX company rocket launches have been on hold since last September after an accident of destroying a $62 million Falcon 9 booster and a $200 million Israeli communication satellite. About when will the firm be able to launch these satellites, is yet to be confirmed by the authorities.

Once the SpaceX satellites will be fully deployed, it will pass over all parts of the Earth's surface. The satellites are said to orbit Earth at altitudes ranging from 714 to 823 miles (1,150 and 1,325 km) which are above the International Space Station, but below geostationary satellites. Each satellite is about the same size of an average car (not including its solar panels) and weighs 850 pounds (386 kg)

However, according to a Science correspondent, Jonathan Amos, SpaceX has allegedly given a "technical glimpse" of its proposal. In his report, there are 4,425 satellites (plus spares) and operating in orbital planes at altitudes ranging from 689 miles to 823 miles (1,110 km to 1,325 km). About how fast the internet connection speed will be, there is no solid information about it, but rumors say that it will be 200 times slower based on the global average internet speed of 2015, which is 5.1 Mbps. About its price for subscribing to this global Wi-Fi, it is also yet to be confirmed.

The End of Local Internet?

For the SpaceX, it is understood that the company has some prototype satellites to launch next year, but the actual constellation or full implementation of this proposal will not see the light of day until the turn of the decade. However, if FFC will grant permission and the company being able to launch its prototypes before the end of the year, we will only have a glimpse of the future of global internet access would feel like. And as for the local internet, it will not yet be obsolete.

Other Companies Pitching In This Market

SpaceX is not the only company investing in this very expensive project (it is reported that SpaceX has spent around $10 billion or more). Some companies like Telesat, Boeing, and MDIF (Media Development Investment Fund). With the MDIF, the project name for their global internet access was Outernet. The project's proposal was to launch hundreds of low-cost miniature satellites known as CubeSats that will give free internet to the masses, but will only allow the user to view certain sites - 21st Century Wire.

New space suit for Mars revealed. The revelation of the space suit design will be used by the people who are planned to have their mission under NASA in 2026.

People are asking of the SpaceX Falcon 9: would future travel to the International Space Station be unlikely? That will have to be determined as the investigation on the accident continues.

The SpaceX Falcon 9 has rescheduled launches to mid-December as it wraps up investigation.

Chang'e-5 Lunar Sample return mission is prepping for late November launch. This is based on evidence dervived from satellite and ship-tracking data.

SpaceX Delays the Launch of a Big Batch of Internet Satellites: Here’s How to Watch Live

Starlink satellites are scheduled to be deployed by SpaceX aboard the Falcon 9 rocket. The launch is set for September 18 at 1:57 p.m. EDT Friday.