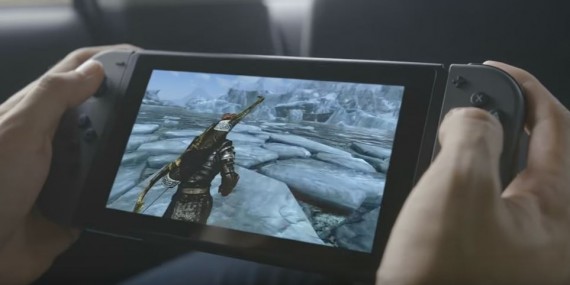 Great news for The Elder Scrolls fans. Skyrim director confirms the Switch version and adds a bonus information about The Elder Scrolls 6. Read all about it here. (Photo : YouTube / GameplayOnly - Trailers & Gameplay)

During the Nintendo Switch's video reveal, it featured a scene from Skyrim being played on the handheld-console hybrid. People doubted it could be true. Others on the other hand, are very much excited about it. That preview may have just been confirmed to be legit by a statement by the Skyrim director himself, plus he added a bonus info for The Elder Scrolls fans.

In an interview posted at Glixel.com, Skyrim director Todd Howard said that he tried out the Nintendo Switch during E3 and had positive vibes about the handheld-console hybrid. He was excited to let everyone know that he loves it and has to play it but then remembers about the non-disclosure agreement stuff so he put on the brakes right away. He then added that the Switch is one of the best demos he's ever tried, changed his mind and elevated it to be the best demo on the conference.

More Praises for the Nintendo Switch

Howard is now one of the gaming industry's big bosses to ever praise the Nintendo Switch, along with Ubisoft's Yves Guillemot, and NVidia's Jen-Hsun Huang. To recap, Guillemot emphasizes that the handheld-console hybrid should put Nintendo back in the gaming industry's 'race', as it is constantly being beaten by top 2 players, Sony and Microsoft. On the other hand, Huang ensures that they are working round-the-clock to have their graphics chip to perform its very best with the Switch.

This time, another big boss joins the elite group of Nintendo Switch believers. As stated above, Howard is very impressed with it and exclaims it to be the best demo for the recent E3. He also added that what Nintendo is currently doing for the Switch is "really smart" and confirms that their company, Bethesda, will be supporting the device. Howard also added that this will be the first time that they will support Nintendo since the NES.

Skyrim Confirmed for the Nintendo Switch

When asked about Skyrim's appearance on the Nintendo Switch's video reveal and if the game can really be "played on the go", Howard says, "It's the same game on the TV and on the other screen." That said, not only did he confirm that it can be played on both screens, he also has implied that Skyrim will indeed be a title for the Nintendo Switch. All we need to do now is wait for an official announcement.

The Elder Scrolls 6 for the Nintendo Switch?

When the project timeline for The Elder Scrolls 6 rolls out, I'm sure questions about it to be released on the Switch will pop out. At this point, my guess will be that it's very possible. Judging from Howard's impression on the Switch and his promise of support for Nintendo, the decision to make or not to make a Switch version will most likely to be set on Bethesda's table.

PS4 Pro Not Performing Well Days After Release, Goes To Show Why Choosing Not To Be An Early Adapter Pays Off

It really pays off if you do not adapt early to new gadgets. You get behind a bit, but who cares. The concept of gaming is still there. If you are smart enough not to go through spoilers, then you should be fine.

Grandma Shirley is nothing like the common grandmothers out there, she does not only play Skyrim but she has also posted over 300 Skyrim episodes and has more than 190 Youtube subscribers. What can you do?

Why would they? It's good that people can actually get to check ahead what they are about to buy right? Find out what made Bethesda want to stop early game reviews here.