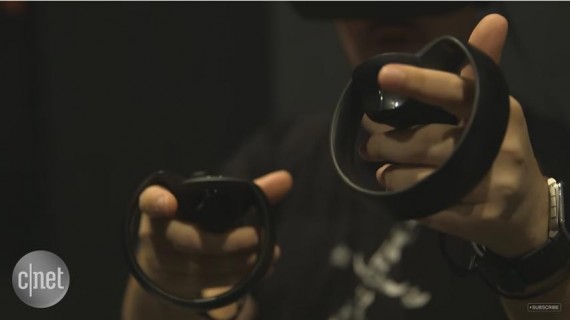 Oculus has somewhat taken a back seat with the introduction of other players in the VR market. But with the new Touch controllers and upcoming games, the console is poised for a comeback. (Photo : C|Net/YouTube)

Though the console can be considered as one of the pioneers in the virtual reality platform, the Oculus Rift has taken a bit of a back seat recently. It was once applauded for its power and potential, but was quickly overshadowed by newer competition that offered more efficiency at cheaper prices. But with new games and the new Oculus Touch controllers, the console is poised to take the spotlight again.

As Ars Technica notes, the Oculus Rift was introduced back in March. And while it was a wonderful piece of technology that gave a wonderful glimpse at what virtual reality could be, there was something missing from it. That is, hand-tracking controllers that could enable wearers to move within the digital world.

But recently, Oculus has been appearing at trade shows with its new Touch controllers that would allow VR enthusiasts to do just that. The publication goes on to state that the unit is both comfortable to hold and incredibly effective as well. However, users will need to install a secondary camera for them to work.

The official launch of the controllers will happen on December 6, which Oculus is using as a means to introduce numerous games as well, all of which are made better by the Touch controllers. One of the titles will be "VR Sports Challenge," which covers a wide range of different sports. However, the game is not as immersive as one would hope.

"VR Sports Challenge" compartmentalizes the sports into a series of mini games as opposed to an actual whole. When the player is engaged in football, for example, the headset is used to aim and the Oculus Touch controllers are used to throw the ball to the receiver. However, once the throw is completed, the point of view is then changed to the receiver in order for the player to catch the same.

Meanwhile, in basketball, players will simply dribble in place and look for open men to pass the same - with the point of view automatically changing in between. There is no active running around and dribbling across the court. However it is saved by the comfortable sensation of throwing the ball up in the air and hoping it will go in the net. In this regard, the controllers are stellar.

Another title that has been revealed is "The Unspoken." Here, players will get the chance to experience having power at their fingertips. On one hand, a fireball is constantly growing. On the other is a reflective shield. Other spells are activated by taking part in mini games. Meanwhile, "Medium" allows players to mold and create 3D objects. To make things easier, gamers will have the option to use preset stamps of objects, such as mechanical gears and a human skeleton.

The entire list of games, as Upload VR notes, has yet to be released, but will come sometime next week. Nevertheless, the available games are only proof that Oculus is still in the VR game and that it knows what it had to do and is willing to do it. However, those that are interested in buying the console and the Touch controllers need to act fast.

With the holidays just a few weeks away, it is time to start rounding off the best gaming gadgets of the year, which would work perfectly as a gift.

PS4 Pro vs. Xbox One S: Which Power Console Is Worth The Investment

In the world of gaming, there are two companies that are constantly pitted against each other: Sony and Microsoft. And with the PlayStation 4 Pro and Xbox One S in the market, there are plenty of things to consider before choosing which to purchase.