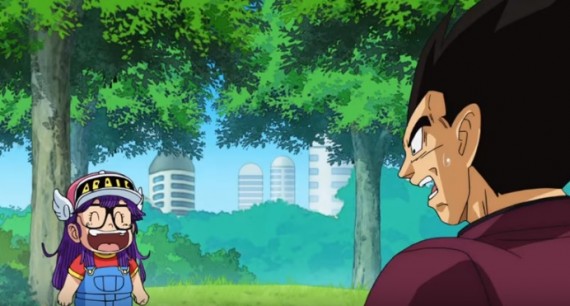 Amidst the epic battle in the last episode, Dragon Ball Super will somehow showcase a lighter combat this time. Goku, who works as a part time security guard, will face an interesting character.

Before we start discussing what episode 69 is all about, a recap is a must. Episode 68 titled "Come forth Shenron! Whose wish will be granted?! The episode started when Bulma was trying to recreate what had happen in the future by travelling back to the future. She encountered an error using the time capsule the first time but was able to find a similar "stone" that would warp her to the future.

Goku then surprised Bulma via instant transmission and asked her for the dragon radar. Bulma asked Goku on why he needed Shenron and Goku said he needs to revive King Kai Sama. Bulma then had an idea on how to get the alternative "stone" for her to travel to the future and that is by asking Shenrons help. The arrival of Beerus and Whis shocked Bulma as she was waiting for Goku's return. Goku was able to gather all the Dragon Balls and Summoned Shenron.

From a simple plan and a simple request, it turned out to be a turmoil when almost all of Goku and his friends appeared to have a request to Shenron. They were fighting for the position for one request since Goku has the other one. Gohan then stormed the front and asked Shenron to cure his baby, Pan Chan, Shenron then granted his wish. Shenron was about to leave without granting their last wish but she was threatened by Bulma. She said that if he won't stay for another minute he will tell it to Beerus which scared the hell out of Shenron.

Goku was sent to the Earth's core to find the stone they were looking for but Beerus and Whis was able to get hold of him. Goku doesn't know what he was doing there and what the stone was all about.. Beerus, Whis and Goku travelled back where Shenron is and Bulma was shocked when she saw Beerus. She was scolded by Whis stating that building a time machine is a grave crime. Beerus then destroyed the stone and with the snap of his finger, destroyed the time machine too.

As mentioned, episode 69 will show a lighter side of the massive series. It will partake on an event where Goku will have trouble with. According to Natalie.mu(via Herms 98). Our favorite hero Goku will be seen as a part time security guard at the World Invention Award. The event will show us some inventions of Senbie Norimaki and appearances from Dr. Mashirito, Gatchan and various Dr. Slump characters. During the World Invention Award, Goku will face an unlikely character named Arale.

Arale Norimaki is an android built by Senbie Norimaki. She looks like a small girl with purple hair and very thick glasses. She is very energetic and possess a superhuman strength. Like any other kid, she is not fan of boredom. She will create a scene if she has to in order to pleasure himself. That would be the time she will meet Goku, who works as a part time security guard.