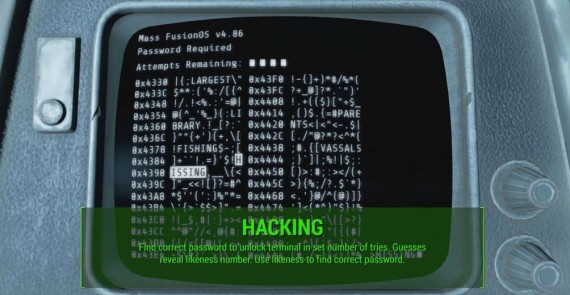 Games today, crazy as they are, would strive to make sense especially for parts that you don't quite understand. One fantasy we have that is being made possible in video games is to be able to hack into systems. It's a cool way to open doors, get data, command weapons, and a lot of other stuff but some games went way overboard and introduced us to the craziest ways to hack systems.

These are some games that we find its hacking concept crazy. Some may be very ideal; some won't work at all when applied to real world scenarios. Come to think of it, maybe the developers for these games made some crazy ways to hack into things to make it memorable. Who knows, maybe they just went crazy especially with that work load and tight schedules.

This was the first game that made me realize that something is in common with the previous games I played which I find crazy and weird; they got unconventional ways of hacking into stuff. Hacking via camera lens is impossible today but it's a bit backed up with the setup that Chicago and San Francisco are run by CTOS. Hacking by line of site is just plain crazy, even with the argument that everything is pretty wired up together.

This one is also a bit crazy but makes more sense compared to hacking through a camera lens. In Fallout 4, you need to guess, or to describe better: spot, the password within a set of gibberish characters. Sounds normal in the hacking world but this isn't the crazy bit yet. What makes it a bit off is that the password is displayed on screen along with other characters, you need to find it. In the world called 'password security', it isn't practical to display the password on-screen in the first place.

If all else fails, Omni-gels come to the rescue when it comes to hacking stuff in Mass Effect, especially for the lazy ones. All you need to do is lube some of it on the board and it's open. What makes it crazy is that anyone with Omni-gel can break in to any system which makes no sense at all. If people in the Mass Effect universe are smart enough to know that Omni-gel can be obtained by everyone, they'd go back to locking things up with bolts and padlocks. Fortunately, the concept got phased out in the sequels.

Most Hated Video Game Characters As Of 2016

We all have that one character we hate from a video game. Be it a protagonist or villain, there's something in that persona that we hate so much. Here are some of them as of 2016.

Final Fantasy XV Director Not Happy About The Game's Early Spoilers; How 24-Hour Review Policy Could Have Helped Avoid This

Spoilers are game developers' worst nightmares when it comes to the dawn of game release. People will just show any information they got about a hyped up game just to prove that they are the first to get there.

BioWare's latest upcoming game will come in a very big package. Here are the latest information so far for Mass Effect: Andromeda, which learned a lot from its previous titles.