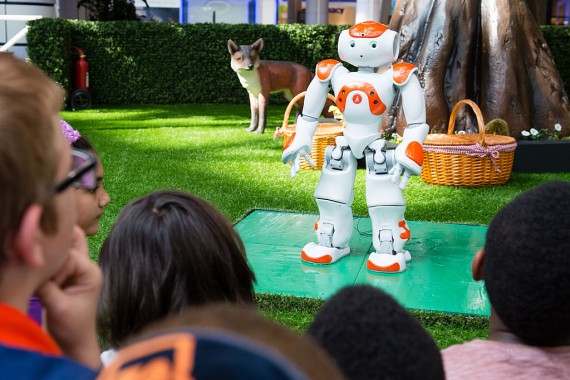 In movies, series and important expositions from different intellectuals, technology destroying the world has been a theory that get stronger while at the same time that innovations growths over our lives.<br /> (Photo : Photo by Jeff Spicer/Getty Images for Westfield)

Although technology has been the biggest achievement of mankind and human intelligence, there are some of these innovations that even when its primal objective is to facilitate our lives, could also mean a huge threat to the entire planet if something goes wrong. If you didn´t know about this, here are the easiest ways that technology could destroy the world in just a few years.

Technology Could Destroy The World Through AI

This is probably the highest possible way in which technology could destroy the world, and it has been showed in many movies as the entire Terminator´s saga. The reason is very simple: of every single definition that you can use to explain what artificial intelligence is, the most simple and truthful could be giving a machine the ability to think. No more, no less.

Think about this argument and even when it is obvious that being something created by the human there would be a lot of measures to avoid any kind of dangerous scenario, it would be extremely easy that things get out of hands and something really bad happens. Considering that in just a few years most of the tech devices will be equipped with AI, which would increase to the point in which a machine could be even more intelligent than a human, it could be a matter of time where these devices are aware of their superiority, and start a massive attack against humans.

In fact, this is something that could even be discussed in a philosophical context, considering that these machines will be creations of a species that has been characterized for treating in the most despotic way those who are considered to be weaker and being as destructive as colonizer, which would have in a total annihilation because of machine´s attack some kind of poetic justice. For this, you just need a robot with AI and the sufficient consciousness of wanting to exterminate mankind because of a reason. The first two elements already exist, and the last could take less than expected .

Technology Could Destroy The World Through The Grey Goo

Back in 2003, Prince Charles warned the Royal Society that this was a risk that needed to be prevented, and it was widely mocked for it, to the point in which many considered him some kind of bizarre parody of a realm member. However, the truth is that what have been one of the most famous apocalyptic scenarios because of technology issue, is not so impossible as it was thought 13 years ago.

In fact, the famous gray goo now exists in the form of the 3D printers, which has the ability to replicate itself in short time by printing the components parts for another machine. We´re talking about a nanoscopic device that could stack atoms together and make molecules.

Although this could offer incredible advances in areas as medicine, these medi-bots would represent the biggest threat to mankind if everything goes wrong -which wouldn't be so difficult- , considering that these devices could indiscriminately make copies of themselves until the whole world is covered into a pile of billions of these machines.

Technology Could Destroy The World Through Geoengineering

Climate change is a huge threat that the world is facing, and many technologies have been developed in order to restore this issue and avoid a major event. However, one of the "best" ways scientist has figured how to fight against this problem is through geoengineering, which is practically some dangerous way of messing around with the planet expecting great results for our interests without any kind of collateral damage. It is the most blatant representation of how the human feels so superior to nature.

Tossing this kind of devices into the sea in huge quantities, filling the atmosphere with many chemicals and covering huge areas with mirrors are some of the solutions that geoengineering offers to fight against climate change. However, the huge problem about this is that many have pointed out that if there´s just a little tiny mistake in the process, the initial issue could become worse than expected since it could destroy wildlife and change the weather even more, which could cause major droughts or floods. This is one of the most famous technologies that could destroy the world.

The Most Incredible Uses Of Virtual Reality So Far

Just like revolutionaries innovations as the Internet or the smartphone, people in many different contexts have started to use the VR glasses in different in areas, improving by much anything related to it.

Apple´s Most Controversial And Succesful Decisions With The iPhone

Apple has always innovated in most of its products, but what the Cupertino company did with its iPhone, change the history of mobile devices because of its greatness and risky decisions.

The Most Amazing Video Games Consoles That Were Never Released

All of these devices were meant to change the history of video games, but for many different reasons, each one of them didn´t came out and ended up being some of those "what if" cases.

Facebook's new AI called the RegNet works much faster than Google's EfficientNet! What could be next for Facebook?