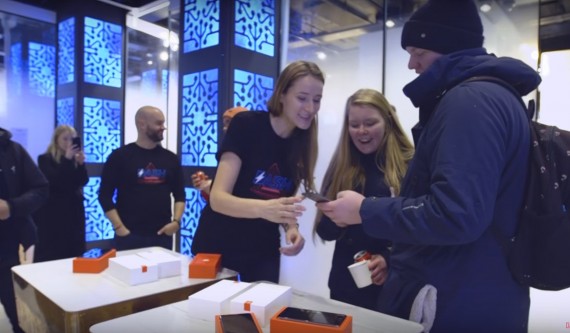 A photo of the OnePlus 3T’s Pop-up event in Helsinki, Finland. (Photo : OnePlus/YouTube)

An upgrade - when people hear the word upgrade, they get excited because it means something better. Though upgrades are great, sometimes it isn't necessary. Speaking of upgrades, let's talk about if the OnePlus 3T is worth buying for the OnePlus 3 users. Here are the things you need to know:

Body Design. On first glance, you could see that the OnePlus 3T's design is very similar to the One Plus 3. In terms of color casing, both models are built of the same aluminum alloy, but the OnePlus 3T model is available in "gunmetal" and "softgold." With the OnePlues 3T's body dimensions and body weight, both phones share the same attributes.

Well, the good thing about this is if OnePlus 3 owners will buy this phone, it won't feel so foreign to them. However, the OnePlus 3T is supposed to be an upgrade. So is it a good thing? You decide. Let's continue with the other things.

Display Design. Just like the body design, the display design is identical. The display type, display size, display resolution, and all the great benefits from the OnePlus 3 thin bezel are just the same. I don't know, but if it's an upgrade, maybe there should be at least an upgrade with its display? Displays are a big thing nowadays.

Software. Now this is good news. The OxygenOS, OnePlus' cutom operating system has been revamped for the OnePlus 3T, making the device more user-friendly compared to its predecessor. One such function worth mentioning is its "Clear All" mode that lets the user close all apps with a single button. About its chipset, CPU and GPU, the only slight difference is the chipset, from OnePlus 3's Snapdragon 820 to OnePlus 3T's Snapdragon 821.

Camera Design. Here is another of the upgrade. The One Plus 3's primary camera is 16 MP and 8 MP for its secondary camera. On the other hand, the One Plus 3T's cameras are both 16 MP. Another great thing about the OnePlus 3T's camera is that its front camera is capable of producing clearer photos and videos in low light conditions.

Other Things That Are Different. The difference in chipsets was mentioned earlier and is definitely makes the OnePlus 3T faster. Another thing is the batter performance. The OnePlus 3T's battery has more battery capacity by 13 percent and little improvement in charging time.

I think if you don't have the OnePlus 3, the OnePlus 3T is definitely a great phone to have. However, it's a totally different story if you already have the OnePlus 3. The only differences between the two phones are color casing designs, front camera, chipset and battery. Aside from that, there is nothing else.

For me, the "upgrades" were not that revolutionary. The only notable upgrade for me was the front camera which was great for selfies. But again, this is my take. The final decision is yours to make.

Before it was even released, the OnePlus 3T was one of the highly anticipated phones of 2016. Here are the news, specs, price and features. See also how it is compared to one of the hottest phones right now, the Vivo V5.

The OnePlus 3 Android 7.0 update is now available to download as an open beta for all users.

OnePlus 3T: A Review After Less Than A Month Of Its Launch

The OnePlus 3T comes just five months after the OnePlus 3 and it is shaping up to be one of the best smartphones that you can buy today. Base on the company's description, the OnePlus 3T delivers the best user experience, thanks to the latest hardware upgrades and carefully tested software enhancements.

OnePlus received a feedback from a small number of users saying that at times they notice a subtle visual effect when scrolling on the recently released OnePlus 5. However, the company claimed it as a normal effect and not the result of any manufacturing issues.