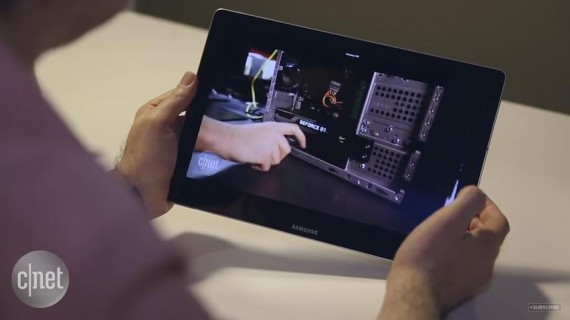 Since they were first introduced into the market, tablets have come a long way and several good Android tablets have been launched in 2016. (Photo : C|Net/YouTube)

When tablets were first introduced into the market, it bridged the gap between smartphones and laptops. The public jumped at the opportunity to surf the Internet, or watch videos on a larger, yet still portable screen. But since then, the technology has certainly developed and current models - the 9.7 inch iPad Pro, the Galaxy Tab S2, the Pixel C and Xperia Z4 - have come a long way.

C|Net lists down these tablets as some of the best tablets of 2016 and it is easy to see why. Each device brings its own level of power and unique specs mixture that truly helps set it apart from the competition. In the most vital aspects, these tablets from Apple, Samsung, Google and Sony are at the top of the class.

The 9.7 inch iPad Pro, which starts at around US$600, is essentially a better version of its predecessor. It has a better camera, a better screen and was shrunk down to a more reasonable size. In addition, the tablet works well with various Apple accessories, such as the Apple Pencil and the Smart Keyboard. Granted, it does not have the power to battle with laptops, but it comes fairly close.

The rear camera on the iPad Pro 9.7 inch is 12 megapixel that is capable of recording 4K video. Meanwhile, it sports a 5 megapixel front camera. The camera system is partnered up with the best display that Apple has put on a Tablet. There is less glare, but the brightness of the unit has still been increased.

Meanwhile, Samsung's bet this year was the Galaxy Tab S2, which definitely puts up its own fight in the battle for the 2016 best tablet title. For its lowest level - which still rests pretty at 32GB - the unit starts at around US$250. Naturally, it is the best tablet offering to come from the Korean tech giant and is one of the best ones in the Android market.

The Galaxy Tab S2 is one of the lightest, slimmest and therefore most portable tablets in the market right now. The smaller variant weighs just 265 grams and measures 7.8 x 5.3 x 0.22 inches. But there are of course more to it than just that. For individuals who have trouble with the internal storage, for example, Samsung included a microSD card slot for additional storage.

The device, which can last for 13.2 hours on a single full charge, can also easily play various games. The screen, as reported by Tech Radar, is a beautiful Super AMOLED screen and is available in an 8 inch and 9.7 inch option. The rear and front cameras are 8 megapixels and 2.1 megapixels respectively.

Meanwhile, Google's Pixel C offering is heavy on the wallet at US$500. However, the search engine giant definitely brought its A-game that reasons the heavy price tag. The device has a sleek and solid build that is still comfortable to the touch. The device is also compatible with a magnetic keyboard that is sold separately at US$150.

It display is 10.2 inches with a 2560 x 1800 pixel resolution. Its power comes from the Nvidia X1 quad-core Maxwell GPU, which makes the Pixel C powerful enough to properly carry office systems - to an extent. Running on Android 6.0 Marshmallow and 3GB of RAM, interested buyers can opt for a model with internal storage of either 32GB or 64GB.

Sony's contender this year is the Xperia Z4, which is a 10 inch tablet that is both waterproof and dustproof, and starts off at US$559. But what truly sets it apart is its customizable feature. Users, for example, can opt to automatically arrange their apps by most used, or make it so that Spotify connects as soon as headphones are connected to the device.

The Xperia Z4 tablet is powered by a 2GHz Qualcomm Snapdragon 810 64-bit octa-core processor. It runs on 3GB of AM and comes with 32GB of internal memory. And for those that still need more storage space, a microSD card can expand this by 128GB.

2016 ended on a good note for Microsoft, as it unveiled some of its best products. But it looks like the company has more under its sleeve for 2017, for the Surface Pro 5 and the Surface Phone.

Apple recently released new versions of its tablet line-up with the 10.5-inch iPad Pro and the 2017 12.9-inch iPad Pro leading the way.

Apple's newest mobile operating system, which is the iOS 11, adds some key features to the new iPad Pro that makes it work more like a MacBook Pro laptop than ever before.

The New iPad Pro's Secrets Are Out