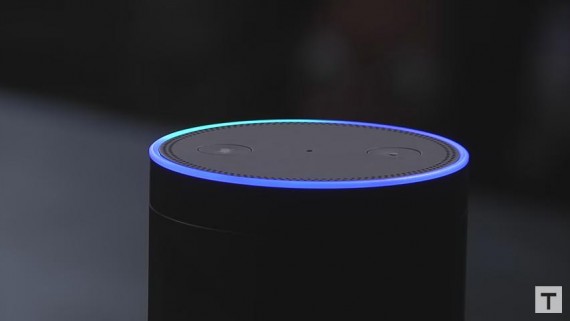 The online retailer is making major upgrades to its Amazon Echo, including a new touch screen that is sure to make using the smart speaker more efficient.<br /> (Photo : Tested/YouTube)

With the introduction of Google Home, Amazon experienced its first wake up call in the market of smart speakers. Up until a few months ago, the Amazon Echo was soaring high on its own cloud. Those days have since ended and the online retailer has started to make changes to the device to keep it more relevant than its competition.

As Bloomberg reports, Amazon is currently working on an Echo-like speaker that will feature a 7-inch screen. The publication goes on to say that this is proof of the company's efforts to capitalize on the present popularity of its voice-controller home gadgets. Like a double-edged sword, the upcoming product should also be enough to end off competition from the likes of Google and even Apple.

The touch screen will be a relatively far jump from the current design of the Amazon Echo, which is simple and straightforward. Two people who are familiar with the project told the publication that the relevance of the screen was to make it easier for users to access various features such as weather forecasts, news, and daily appointments. Which is understandable as the current setup bags almost solely on Alexa.

Alexa, Amazon's reliable virtual assistant, has been the driving force of the Amazon Echo, both in practice and in terms of popularity. Users speak directly to Alexa in order for the smart speaker to function. However, adding a touch screen will essentially give users another way to access these features. Reportedly, the new design will display the screen at an angle so that it is easily viewable while it sits atop a counter.

In addition, the device will reportedly run on an optimized version of Fire OS, which is the software that currently runs Amazon's Fire tablets and its Fire TV set-up box. Another new feature that the upcoming device might sport is a feature that will allow owners to pin physical items such as photos on the unit. And of course, the Amazon Echo 2 will still be primarily powered by Alexa and will, therefore respond to various voice commands.

The Amazon Echo 2 might be revealed as early as the first quarter of 2017. If so, it has plenty of momentum to ride on as the reigning smartphone is still incredibly popular and sought after. A report by Geek Wire specifically mentions that the online retailer experiences twice as much sales during this year's Cyber Monday as opposed to last year. More specifically, sales of the Amazon Echo were multiplied by at least seven times from last year.

The relevance of smart speakers has definitely solidified over the years, but it is nowhere near the popularity of smartphones and tablets yet. The Amazon Echo is still confined to the area of a home and does not readily connect to other devices, which might be its biggest hurdle for now. Nevertheless, there is no denying that smart speakers and other smart devices are quickly gaining momentum in the tech world - and Amazon is likely to take advantage of this by expanding the reach of its Alexa-controlled devices.

The Microsoft Surface Phone Potential: Specs And Features Worthy Of Its Branding

For good reason, this year has been great for all of Microsoft’s Surface products. The company is in the best position to release a new player - the Surface Phone - into the tough smartphone market.