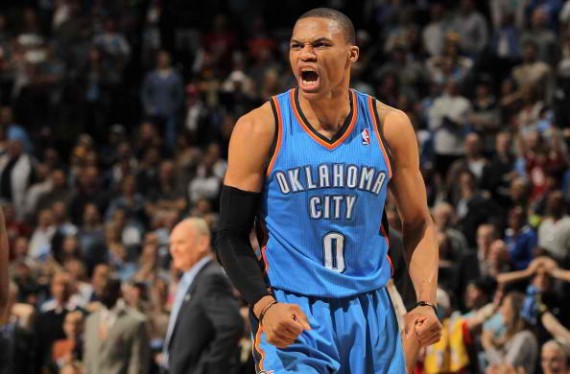 DENVER, CO - APRIL 23: Russell Westbrook #0 of the Oklahoma City Thunder celebrates as the Thunder defeat the Denver Nuggets 97-94 in Game Three of the Western Conference Quarterfinals in the 2011 NBA Playoffs on April 23, 2011 at the Pepsi Center in Denver, Colorado. (Photo : Photo by Doug Pensinger/Getty Images)

The regular 2016-2017 NBA season is still nowhere near the middle, but the race to the season's MVP title is already tight. The list is now crowded with NBA superstars who are obviously having their breakout, but with their team's standing, their stints might just be ruled out at the end of the regular season.

Last season's MVP race was a record-breaker in the league's history. The Golden State Warriors' Stephen Curry nabbed the title in a unanimous decision where members of the panel all voted for him as their top bet for the MVP award. He then averaged with 30.1 points, 6.7 assists and 5.4 rebounds per game, and these stats got him his second consecutive reign on the court.

This season, however, will never be the same for Curry as Kevin Durant boarded the roster of the Warriors. With the two playing together to put the Warriors on top of the standing, these two are on tight competition for the season 2016-2017 MVP title.

Despite Warriors climbing on top of the ladder, there are other guys inside the court threatening the chance of Curry and Durant getting the next MVP award. We see another player averaging a triple-double stats and that is the Thunders' Russell Westbrook. The eyes of analysts are hot on this point guard's play, and countless NBA news is headlining his name. He now becomes the top bet for most, leaving Curry and Durant behind. The Rockets' James Harden and the Cavaliers' LeBron James still have a lot to get through, but their stats are fine enough to make them qualified contenders on the Kia MVP race.

These five are phenomenally good, but the normal season has just started and the MVP chatter is just heating up. There are more players out there who are delivering notable performances like Anthony Davis and Demarcus Cousins perhaps, but it is still up to their team's performance if these guys can get their legitimate chance to the position. Sadly, the Kings and the Pelicans are hanging far behind the edge of their Conference's top 8. Let us not rule them out though as they still have until February to make a big leap towards the top.

Here are this season's top five players who could wind up grabbing the MVP title. Ranked from worst to best, let us find out if these NBA superstars really have the chance to be hailed as "The Best" in the league.

We have all heard the previous news about Harden claiming himself as the best NBA player this season. We can't blame him for thinking so since he has been posting monster numbers under his stat since he played as a point guard for Coach Mike D'Antoni. The experiment on him has been a smashing success and is now averaging 30.6 points, 13 assists and 7.6 rebounds. He even recorded his 10th triple-double in the seven years run of his career. The Rockets though are on the fourth in the Western Conference, but if he gets his team on a higher rank, he might get a better chance of really becoming the league's best.

Winning his third straight MVP title this season might be quite a challenge. He is playing great but he has also been missing some three-pointers. He is making 26.7 points, 4.1 rebounds and 5.9 assists which are far from his stats last season. The addition of Durant in the Warriors also means lesser chance for Curry to standout. The fact though that he has been in the MVP streak for two seasons, it is possible that he keeps his chance in the race.

Durant leaving the Thunders may have been the best decision he did for his career now that he has boarded a strong contender for the championship title. He, however joins other top players in the league like Curry and Thompson, and like last season's MVP, he may also not have all the opportunity to dominate.

With the current standing though, it is highly possible that the warriors will finish the regular season being on the top and this means he and Curry will have the highest possibility to be hailed as 2016-2017's MVP.

The King James is the league's top one player, but he has less captivated the MVP panel for the past seasons. However, analysts say that if he manages to put his team on top of the Eastern Con once again, his efforts might be noticed this time most especially now that it looks like he is going to play against a roster of four superstars (the Warriors).

Westbrook's name is constantly popping on the MVP discussions. He is now getting all the spotlight since Durant left the Thunders for the Warriors. Now that he is leading his team, he gets all the chance to average a triple-double and clearly, the analysts are noticing it. He is averaging on 31.1 points, 10.5 rebounds and 11.2 assists. Among the players on this list, he definitely holds that highest stats.

Voters now have Westbrook on their top bet, but his team is currently on the fifth of the Western Conference. With a little more push, he might end up being the MVP this season and his team the emerging winner of the West.

For this to happen though, Westbrook will have to face solid challenges. The Warriors are becoming immortal inside the court, topping previous records, and the players are also recording their triple-doubles. Westbrook will have to turn nuclear and topple down the elite teams of the league. As in the most case, the MVP usually goes to a player of the top two or three teams in the league and the Thunders are obviously not there yet.

NBA superstars DeMarcus Cousins and John Wall are in the latest NBA trade rumors where they are suggested to go to the Boston Celtics. For the trade to happen though, a four-team trade deal is said to happen this season.

Anthony Davis of the New Orleans Pelicans is being headlined on several trade rumors. After he was speculated to leave his team and head to the Cavaliers, Davis is now rumored to run to the Raptors and lead the team on rim protection.

The Clippers, despite it being already a great team, is rumored to make a couple of changes on its roster this season. Chris Paul, Blake Griffin, and Jamal Crawford are reportedly on the trading list for Stephen Curry, Pau Gasol, and Rudy Gay.

Kevin Durant and Trae Young are going to join this year's NBA 2K tournament happening this April 3 but there is still no sign of Kobe Bryant.