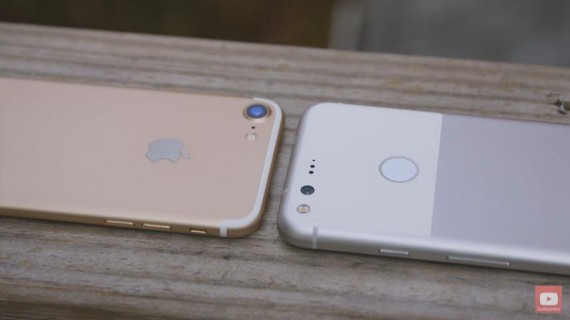 Apple’s iPhone 7 and Google’s Pixel units boast some of the best specs in the market. However, each unit also offers its own unique features and user experience. (Photo : sakitech/YouTube)

Apple's iPhone 7 Plus and Google's Pixel XL were both announced in the latter part of the year. Before then, each unit received plenty of hype in the days leading up to its official release. As both devices boast stellar specs, unique features, and modern design, it is easy to see why the flagships have taken the smartphone market by storm.

Apple also changed the minimum built-in storage for the iPhone 7 Plus. Interested buyers can now choose between 32GB, 128GB, and 256GB of internal storage, which Apple users have been clamoring for ages. Two of the biggest features that the handheld has, however, that it is waterproof and has a dual lens camera.

The iPhone 7 has a rating of IP67 rating, which is only slightly less than the IP68 rating of Samsung's Galaxy S7 and S7 Edge. The device from Cupertino can stay submerged under 1 meter of water for just 30 minutes. Granted this does not mean users can explore the ocean with the handheld, but it does offer security from common spills and quick dips.

The front camera of the unit is 7 megapixels, but it is really the dual 12-megapixel rear camera that makes the iPhone 7 Plus shine. The new camera system allows more zooming and a new portrait feature. With this, users have easy access to an effect that will make the background of the photo blurred, while those that are part of the foreground are clear.

The device comes with either 32GB or 128GB of internal memory. Unlike other Android devices, the Pixel XL does not come with a microSD slot. It also does not have the waterproof or dual-lens camera feature that the iPhone 7 Plus. Instead, it has a relatively standard 12.3-megapixel rear camera and 8-megapixel front camera.

One of the things that do make it special, however, are that it is one of the only two devices that are compatible with Google Daydream, the company's bet in mobile VR gaming. It has been called one of the best players in the virtual reality segment of the tech market. Which only proves just how stellar the display and graphics of the Pixel XL are.

As Business Insider notes, the difference in screens between the Pixel XL and the iPhone 7 Plus are staggering. The Cupertino offering is a Retina display, while the Google device is an AMOLED screen. Things such as photos, videos and applications are sharper in the Pixel.

iPhone 8: 10 Prototypes Being Tested By Apple

Apple is not taking any changes at blowing the iPhone 8. There is a steady following for the device and the Cupertino is aiming not to disappoint.