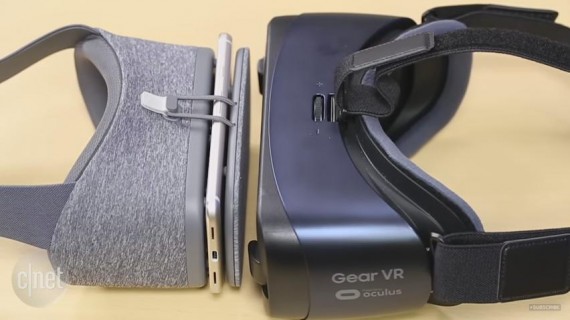 The Samsung Gear VR and the Google Daydream are two of the leaders in mobile virtual reality gaming. Both come with their own set of benefits and limitations. (Photo : C|Net/YouTube)

This year was when virtual reality really blew up. Various manufacturers offered up their own takes on a VR console and most have been successful in their own right. While some players - such as Oculus, HTC and Sony - have opted for a more powerful yet retraining approach, there is also Samsung and Google who decided to take advantage of the portability of smartphones.

The appeal of the Oculus Rift, HTC Vive and PlayStation VR is that the power that they bring. There are spectacular games and worlds to explore with that kind of power and these companies have definitely delivered. However, the definite downsides include price and location limitations - once the items are set up, it becomes difficult to move them.

Which is why smaller, less powerful options like the Samsung Gear VR and the Google Daydream are not to be ignored. They offer what is relatively the same experience with less cost and less physical restraints. They are also significantly less expensive, as long as the buyer already has any of the compatible mobile devices. But how do the two differ from each other?

As Neurogadget notes, the biggest and most basic difference is compatibility. While the Samsung Gear VR can be used with any Samsung device from the Note 5 onwards, the Daydream is only compatible with either the Pixel or Pixel XL. However, the former needs to be connected to the actual headset via USB wires, while the latter only needs to be placed within the headset.

The Samsung headset has its trackpad and other controls directly on the wearable itself. In other words, the Korean tech giant has opted for no remote control, which works both ways. On one hand, accessories are easier to keep up with. On the other hand, control by reaching to one's temples is a slight disconnect from the virtual reality world. However, users can also opt to purchase a controller from a third-party provider.

Meanwhile, the Daydream does make use of a bundled remote control, which correspondingly mimics a user's movements. The remote also features a trackpad and is definitely more standard in the virtual reality platform at this point. It allows the wearer to perform control emotions in a more free-handed manner.

Both devices also have their own special features, which correlate to their respective manufacturers. The Gear VR is able to access other services such as Netflix and "Minecraft." On the other hand, Daydream is compatible with various Google applications such as YouTube, Google Play and StreetView. As it is older, Samsung's offering already has access to 400 available applications while the newer device from Google has not broken into its first hundred yet.

The Gear VR is a bigger device and is available in the market for US$100, according to C|Net. It is also provides a much sturdier experience than its competition. And disregarding the device that is being used, it will provide the user with a 2560 x 1440 pixel Super AMOLED experience. On the other hand, the Daydream is softer to wear and costs less at US$80. The display itself depends on the handheld that it is paired with.

Oculus has somewhat taken a back seat with the introduction of other players in the VR market. But with the new Oculus Touch controllers and upcoming games, the console is poised for a comeback.

With the holidays just a few weeks away, it is time to start rounding off the best gaming gadgets of the year, which would work perfectly as a gift.

Google Daydream Infuses Virtual Reality With Anxieties Of The Near Future

The latest offering from Google Daydream is a surrealistic mix of virtual reality and familiar anxieities. Partnered with Tender Claws, the game playfully puts gamers in various environments with strange dichotomies.