The Craziest Tech Products That Exists In Japan 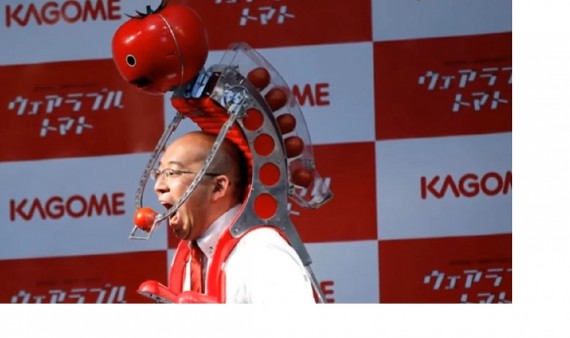 What remains unknown is how the western customers would react if these products suddenly appear in their market. Could it be a huge success or it would fail miserably? That is the real question.<br /> (Photo : Youtube/World News Channel)

Of every single country in the world, Japan is one of the most important in the tech industry, giving the fact that it always has been characterized for developing incredible innovations that have marked a turning point. However, one of the most curious peculiarities in this field is that Japan also has release extremely awkward tech products in its market, that could be seen as crazy invention anywhere else but there. In the case that you don´t know any of these devices, here are the strangest.

An Air-Conditioner Helmet For Construction Workers

Although this may see as a lie, or something that could be just a dumb and exaggerated joke about how bizarre some Japanese tech products are, this is actually so real that not even in science-fiction parody movie you would find it. I´m talking literally about a helmet equipped with an air conditioner to get your head cold. As if it were some kind fan cooler for a device that could overheat.

The Kuchofuku A/C helmet was designed for construction workers who have always complained about the horrible conditions of working through hot summer days wearing a hard hat. So, in order to make them feel more comfortable and increase their performance, it was decided to make this bizarre product, which comes with a fan sewn into a fabric neck covering that offers cool air to the neck and the back of the head, which could decrease its temperature by up 44.4 degrees Fahrenheit.

The most incredible fact about this product is that it weighs 6.9 ounces including its battery box, which means that it weighs lighter than bike helmets. Naturally, this hard hat also comes with the respective protection from falling objects, and if you want to any other thing that it actually has air conditioner included, the Kuchofuku company has made pants and shirt with this device.

One Of The Craziest Tech Products: A Wearable Robot That Provides Tomatoes

I know this would be weird, but if you are someone who has always dreamed about a tech device that you can put on your shoulders, in order to receive a bunch of tomatoes from it, in Japan, there is actually a product that would make this awkward dream come true. I´m not kidding, this thing is called Tomatan, and it consists of exactly what I just described.

Although this might seem as something crazy as hell, is actually have a reasonable explanation: the inventor of this device noticed that people who run often looked for bananas to recover their energies, instead of the tomatoes, which the Japanese ketchup company explained its health benefits for people who practice this kind of sport.

When the brainchild of this robot realized that one of the main reasons for runners to not carry tomatoes with them -in addition, that banana tastes a lot better- was that these are very difficult to transport in these conditions, considering that it doesn't have a protective skin. In any case, the Tomato was one of the tech products that wasn't allowed to be included in any competition and practically disappeared after that.

Singing if you´re not a singer is always very uncomfortable, considering that knowing that someone is hearing our voice could be so disturbing for many people, who feels this situation as many others feel to be seeing naked. Believe it or not, in Japan there´s a product for this kind of folks, which even if it is extremely rare, is actually incredibly useful.

This product is called Noiseless Karaoke Mut Mic 2, and it consists of a microphone in which you can sing as loud as you want, and no one will listen. Also it has a USB port, and the option of putting an auricular to hear when you are singing. Although this might seem as that kind of tech products whose public could be so minimum that it wouldn't last even a month in the market, it is actually a very successful device that has solved the "singing" issue for many people.

Although there has been many other reasons for his victory, many believes that Trump was elected because the way he used social media networks as Twitter, since he had the conventional media against him.

WikiLeaks Suffered A Mysterious Outage For 4 Hours: Victims Of A DDoS Attack?

There have been many conspiracy theories regarding some U.S. agencies wanting to take out WikiLeaks, considering that the non-profit organization was blamed for wanting to interfering with the presidential elections.

Although it is not known how the Mate 9 will move in the U.S. and European market, this software update represents its intentions of playing the game for real and achieve an important position.

Got A Tech Geeky Mom And Wondering What To Gift Her? Here Are Some of The Savviest Techie Equipment Perfect For Her

Do you have an idea what to get your mom for mothers' day? Look here for options you can choose from!