NBA Trade Rumors: Cavaliers Struggling To Win Another Game; LeBron James To Have A Better Future With The Bulls? 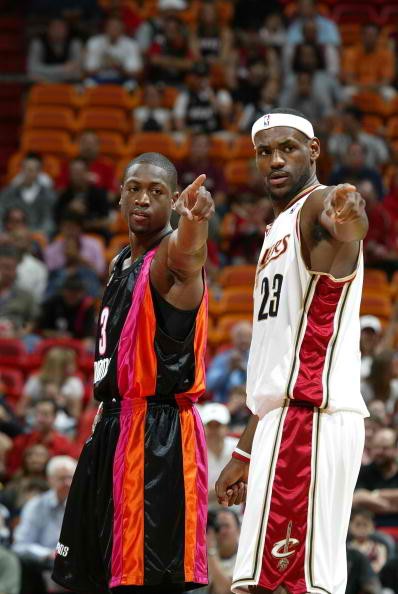 MIAMI - MARCH 12: Dwyane Wade #3 of the Miami Heat and LeBron James #23 of the Cleveland Cavaliers prepare for the game on March 12, 2006 at American Airlines Arena in Miami, Florida. (Photo : Photo by Issac Baldizon/NBAE via Getty Images)

The NBA teams still have a long way to the Finals but with the February trade deadline fast approaching, the NBA trade rumor mill is already overheating. Almost all superstars are being headlined in the latest trade suggestions, and after LeBron James and Dwyane Wade made a scene after the Cavs vs. Bulls game last Dec. 3, the rumors are now after them.

The Cleveland Cavaliers are consistent in being number one in the Eastern Conference, but fate has given them a wake-up call when the team faced their first losing streak from three games where the Bulls gave them their latest defeat. King James, who leads the Cavs, then promised their supporters that the Cavs are done with their "honeymoon stage" and will now take every game more seriously than ever. The regular season is just heating up, but James is already determined to ensure their spot in the finals.

"You've got to play the game the right way," the Cavs' small forward said in his interview after they lose in their game against the Bulls with a six-point lead for the latter. "You've got to battle every night like we ain't won nothing. Last year is last year. Now it's a new season and everybody is gunning for us. It's time to play some real ball and be physical. We've got to man up," the three-time champ added.

With the Cavs showing less resistance from the Bulls and the two other teams they played with before, some NBA observers are convinced that the team should do something with their strategy if they wish to get the chance to retain their championship title. With the Raptors and the Celtics close behind the Cavs, King James has a lot of motivating to do for his team to gain back the action that they showed earlier this season.

While the Cavs have redeemed themselves during their recent game with the Raptors finishing at 116 against 114 points, James has not been exempted from the trend that's going on with the NBA trade rumor mill these days. James is now the subject of the latest NBA trade speculations where he is said to flee the Cavs to join the team that beat them just recently. In exchange, Wade is said to be the swapping piece as the two are believed to be of the same caliber.

Wade is on the top list of NBA superstars who will enter the free agency 2017 class. The name of LeBron James is also expected to pop up anytime soon because he's going to have his player option a two-year maximum deal. While these two won't be seen switching parties at this time of the season, this trade suggestion might soon materialize after the 2016-2017 NBA season.

The 34-year-old shooting guard of the Bulls has previously expressed his desire to play side by side again with the NBA's top one player. The two veterans teamed up in the Miami Heat from 2010-2014 where they managed to bring the team to the championship for three consecutive years starting in 2011. James then decided to make a homecoming to the Cavaliers where he continued his luck in the championship games. Wade, on the other hand, left the Heat last season as he was reportedly unhappy of the franchise's officials.

Some NBA enthusiasts are predicting a reunion for the two with Wade possibly hopping in the Cavs roster or James to the Bulls. However, a third scenario also suggests a swap instead of a reunion for these two NBA superstars.

The Golden State Warriors are now at the top of the NBA league but Klay Thompson is not happy with his teammates. Thompson is reportedly being overshadowed by the GSW new member, Kevin Durant, that is why the shooting guard is reportedly planning to head on to the Celtics this season.

The NBA MVP race is just starting but the name of Russell Westbrook is already topping numerous lists. However, the Thunders are currently on the fifth which may be putting his chance in danger.