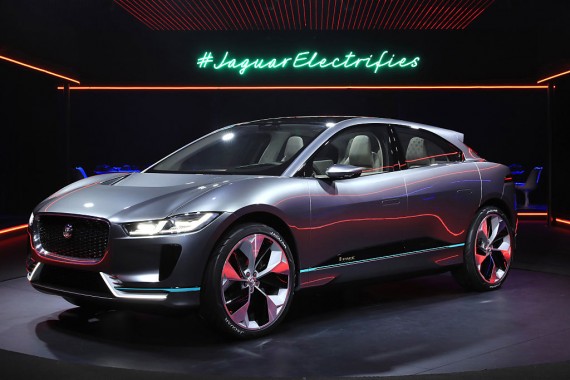 EVs nowadays are coming in with different sizes from small sedans to crossover SUVs. Luxury cars are not left behind as new cars from Audi, Mercedes and Jaguar also take on the electric vehicle market. (Photo : Photo by Handout/Jaguar Land Rover via Getty Images))

By definition, a luxury car is a vehicle that gives comfort and technology that is more than average, with a premium feel and most of the time, an expensive price tag. A crossover sports utility vehicle, on the other hand, is a vehicle that was built with the same platform as a sedan but also gives the looks and features of a bigger SUV at the same time. Let us discuss the differences on the newest luxury crossover SUV's that might hit the market soon, the Audi E-Tron, Mercedes EQ and the Jaguar I-Pace.

Currently, most electric crossover vehicles are still on its concept stage and are not yet due for public release until 2018. However, three luxury electric vehicles took the crowds attention on different occasions, namely; the Mercedes EQ which was unveiled at the 2016 Paris Motor Show, the Audi E-Tron unveiled at the Frankfurt Motorshow, and the Jaguar I-Pace which was recently unveiled at the Los Angeles Auto Show. All three vehicles promise the versatility of crossover SUVs and the premium feel of luxury sedans.

The Audi E-Tron Gives The Most Horse Power

The Audi E-Tron was the first among the three to be unveiled to the public. The electric luxury SUV packs a 95-kilowatt hour lithium-ion battery that provides power to three electric motors, two at the rear and one in front. The electric motors put out a total of 494horse power and 590 pound-feet of torque. Zero to 62 miles can be achieved in just 4.6 seconds and has a maximum top speed of 130 miles per hour. The company claims to be able to reach a 310-mile range on a single full charge.

The Mercedes EQ is equipped with a 70-kilowatt hour lithium-ion battery that powers two electric motors, one for each axle. Combined, the electric motors produce 402horse power and claim to reach zero to 60 miles in under five seconds. The EQ also claims to reach a 310 miles range on a single full charge.

The Jaguar I-Pace May Be The Quickest Among The Three

The latest luxury crossover that was unveiled is the Jaguar I-Pace. The electric vehicle is packed with a 90-kilowatt hour lithium-ion battery that can reach 220 miles on a single charge. The I-Pace gets power from its two electric motors, one for each axle, which produces 200horse power and 258 pound-feet of torque. It only takes four seconds to reach zero to 60 miles and

Since all three luxury vehicles are still on the concept stages, most details have not been disclosed yet. However, we can assume that they are targeting the Tesla Model X as the competition. That competition could also be the reason why some details have not been announced yet to the public as each manufacturer want to hide their ace first to ensure victory from the rest. Whatever we choose from the Mercedes EQ, Audi E-Tron, or the Jaguar I-Pace, the clear winner will still be the consumer, as each will offer the best.

Fans have been anticipating for the release of the new 2018 Mercedes-Benz CLS, although no official statement have been released yet, several reports show that the new car have been spotted once again.

The Audi quattro GmbH became Audi AG’s subsidiary in 1983. They are now rebranding it as a means to show the start of a new era for Audi cars.

A New Rival, Tesla Is Up For Another Challenge With Jaguars New EV

Having a sustainable and reusable energy source has been a challenge with electric vehicle manufacturing. Jaguar gives it a shot with its newest concept crossover vehicle, the I-Pace Crossover SUV.

Jaguar Just Revealed I-Pace: How Does It Compare To Tesla’s Model X

Tesla, world leader for manufacturing Autonomous and electric cars since the early 2000s, may be in trouble as other car brands are slowly revealing their own electric cars. This time, Jaguar unveils their own.