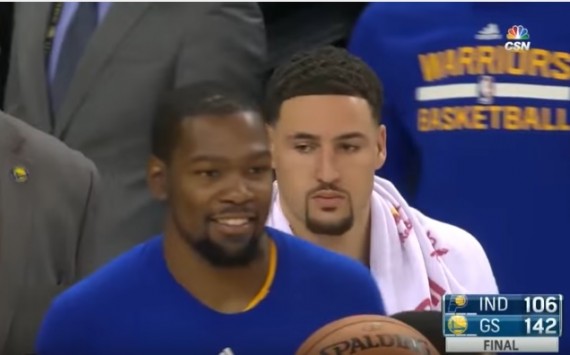 NBA Power Rankings is a metric in where we gauge team's performance week by week. There are a lot of teams who are still struggling due to various reasons, and other flourish the competition like it is nothing.

If we are going to start NBA Playoffs right now, there will be a lot of surprising teams who weren't included in last year's festivities. All of the 30 NBA Teams has still a lot of time to regroup and adjust. That might be in the form of changing their plays or trading some players in exchange for a better one. Let us check some of the teams that need to continue their pace and teams that need to do a major overhaul.

The Golden State Warriors are clicking on all cylinders right now. They are the best offensive team we've ever seen maybe in the history of the game. Ever since they lost their first game, Golden State bounced back and destroyed pretty much every team in the NBA. Kevin Durant's addition to the team is causing a lot of problem to other NBA teams. Although the team showed their weakness during their game against the Houston Rockets, they are still the team to beat this season.

The San Antonio Spurs is the most consistent team on our list for the past decade. A lot of fans hate San Antonio Spurs due to their simple, system ball, but as a basketball fan, they are playing a beautiful game. With Gregg Poppovich as their leader, this old but reliable San Antonio Spurs team is again in the hunt for another title. Tim Duncan is already retired, but with Kawhi Leonard's brilliance, Spurs is a team not to be taken lightly.

Toronto Raptors is on a roll right now with the help of their swingman DeMar Derozan who is posting career high numbers and savvy, steady point guard, Kyle Lowry. The dynamic duo is showing the rest of the NBA that their win-loss record last year was no fluke. They are also helping their teammates develop with their game and preparing them when playoffs comes. Cory Joseph is a vital piece on their team as he brings toughness and team play every game.

The defending Champions are sliding down in our power rankings due to consecutive losses. The King, LeBron James admitted that the "honeymoon" is over and it is time to work. Kyrie Irving is getting back on its groove and it spells trouble to their opponents. Kevin Love is the most consistent player right now to say the least. The former franchise player of Minnesota Timberwolves is averaging a double double and his 3 point shooting is skyrocketing.

On the other hand, here are some of the teams that badly needs help. Dallas Mavericks, Philadelphia 76ers, Brooklyn Nets, Phoenix Suns, Minnesota Timberwolves and Miami Heat. These team needs to make major overhaul as stated for them to have a better record and compete with the best of them.

Battle Of The Point Guards: Kyrie Irving vs Stephen Curry vs Russell Westbrook, Who You Got?

Battle Of The Point Guards: Kyrie Irving vs Stephen Curry vs Russell Westbrook, Who You Got?

Rihanna and Lebron James are surrounded with dating rumors after the pop singer came out strongly during the first game in the NBA Finals.