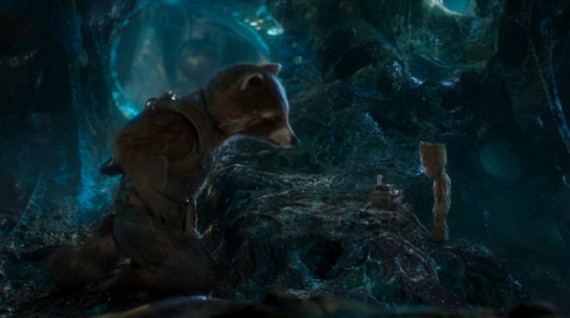 Vin Diesel dished out that Groot and Rocket Raccoon might just star in a spinoff movie and also hinted that the fight between Hulk and Groot is just around the corner. (Photo : Marvel Entertainment/YouTube)

The hype for the upcoming Marvel film, “Guardians of the Galaxy Vol.2” is real. Fans cannot get enough of the first trailers released for the said film. And now there are new rumors spinning around that some of the characters in the universe’s team of misfits are up for new productions.

Just after the latest trailer for “Guardians of the Galaxy Vol. 2” was released, it has been reported that Vin Diesel has dropped some few hints for upcoming Marvel productions that concern Groot and Rocket Raccoon. Diesel recently went on an exclusive interview at the recent Comic-Con Experience 2016 that was held in Sao Paolo, Brazil in Nov. 29 and Nov. 30.

Diesel has revealed that there was a high possibility that Groot and Rocket Raccoon will star in their own movie after Marvel’s other upcoming movie, “Avengers: Infinity War” has been produced and released. He noted though that this was highly likely to happen if it was only up to James Gunn. Since “Avengers: Infinity War” has been divided into two parts, which are slated for May 2018 and May 2019, then the supposed “Guardians of the Galaxy” spin-off movie might take place sometime in 2020. That is again if it was up to James Gunn.

James Gunn was one of the writers for “Galaxy of the Guardians”, which he co-wrote with Nicole Perlman. Upon announcing the confirmation of the sequel for the said movie at the Marvel Studios San Diego Comic-Con International in July 2014, it was also announced that Gunn will also be writing for the sequel. But he will be assuming the position alone this time.

Vin Diesel also said something at the Sao Paulo event that has made fans confused but extremely excited. Apparently, he mentioned about Hulk battling Groot. His exact words were, “I know that somewhere in the universe, you are going to see Groot and Hulk battle. I know it. You can write it somewhere. You are going to see that poster: Hulk vs. Groot.”

The hints dropped by Diesel sort of countered the official statement James Gunn announced back in 2014. After rumors went viral about a standalone Hulk movie in the works, Gunn debunked the rumors saying that there was never any plan to make a new movie starring Hulk. He also reiterated that Hulk will not be appearing in the “Guardians of the Galaxy” movie series.

Fans have been trying to get Groot and Hulk to go against each other because when it comes to strength, and probably mental health, they are at par. Gunn and Marvel might have changed their minds with the Hulk and Groot not crossing paths as both characters are expected to appear in the upcoming “Avengers: Infinity War” movies. Fans are hoping that when the two do meet, an epic scene will take place.

Marvel and James Gunn have yet to shed light on these matters that are exciting fans all over the world. “Guardians of the Galaxy Vol. 2” is set to premiere in the US on May 5, 2017. It will be available in 3D and IMAX 3D.

‘The Defenders’ Episode Count And More Cast Announced; The Punisher To Join The Team?

More cast members and episodes have been revealed for "The Defenders". Check out the details here!

'Guardians of the Galaxy 2' Proves To Be A Spectacular Hit, Thanks To Red’s 8K Weapon Cameras

Digital camera company RED announced that they will partner up with Marvel Studio for Guardians of the Galaxy Vol. 2, which said to be the first movie to use RED’s new WEAPON 8K camera.