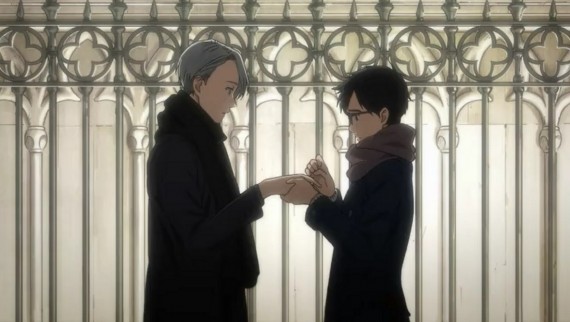 Mitsuro Kubo hinted she already have some ideas for "Yuri!!! on Ice" season 2. Series creators making an announcement in AnimeFest 2017? (Photo : Yuri On Ice/YouTube)

The last scene in "Yuri!!! on Ice" episode 9 looked like a marriage proposal somehow but this time, it's complete with couple rings, church backdrop and chorale music. "Yuri!! on Ice" episode 10 started with some background information on the competing athletes: Christophe Giacometti, Jean-Jacques Leroy, Otabek Altin, Phichit Chulanont and Yuri Plisetsky. Otabek, who we have not seen perform yet in the series, was featured as the non-sociable type who always eats alone.

In the hotel room a day before the finals, sleeping beauty Yuri woke up alone and immediately searched for Viktor. He opened his social media account and learned that he's in the pool with Chris while the other athletes were also having some fun time (except for Yurio who was getting harassed by his fans). He remembered something from the last Grand Prix Final and got depressed. Chris and Viktor barged in the room.

Yuri and Viktor were as close as ever during practice. Viktor told Yuri that he needed to rest for the competition but Yuri told him not to be such a model coach now and they went shopping and sightseeing, it's Yuri's first time in Barcelona.

While having a rest at a bench, Yuri forgot one of the bags. Viktor told him he would buy him a suit as present for his birthday and he should burn the one he wore at the press conference. On the other hand, Yurio was being chased by his fangirls when an unexpected help appears -- it's Otabek! (Okay, let's build this ship). Otabek looked like a bad boy in his motorbike, perfect for tsundere Yurio (he should forget about Viktor now). It turns out, Otabek and Yurio had trained together before at Yakov's training camp. Otabek said they are alike and asked him to be friends with him.

Yuri and Viktor were searching for the missing shopping bag but Viktor wanted to go back and rest. They ended up at a Christmas market. Yuri saw a jewelry store and said he needed a charm for the Final and bought couple rings -- so that round and golden Christmas present was actually a ring! They had some sweet exchange in front of the church.

Minako-sensei and Mari saw Yurio and Otabek in a café and they asked Yuri for a favor. Somehow, it became a dinner gathering of all the finalists minus JJ. Yuri said that in the last Grand Prix Final, he was always alone and wasn't even able to talk to Viktor but now he was having dinner with everyone. Chris spilled that during the banquet after the competition last year, Yuri got drunk and had a dancing showdown with Yurio (The pictures were revealed at the ending of "Yuri!! on Ice" episode 10 and it looks hilarious, especially the pole dancing).

Chris noticed their rings and Phichit immediately congratulated them on their marriage, even telling everyone in the diner about it. Yuri didn't know what to say and while the others' reactions were so funny, Chris looked amused, Otabek was clapping his hands with a blank face while Yurio dropped his mouth in shock.

Viktor said they should not get the wrong idea, it is an engagement ring and the marriage comes after Yuri gets the gold medal. The mood changed at the mention of the gold medal. JJ popped out with his fiancee and said he is the one who is going to get married after winning gold. All the others ignored him and went off.

It's the morning of the Grand Prix Final, Viktor was admiring his ring when Yurio came kicking him and said Victor Nikiforov is dead (You've got Otabek now, Yurio). We were given a preview of the athletes entering the venue while the eliminated skaters were watching from home except for Emil and Mickey. Mickey said he came to the Final to chase away "hyenas" approaching his sister.

The Grand Prix Final short program will start in "Yuri!! on Ice" episode 11. The athletes look like they are hungry for victory so it will definitely be a close fight. Yuri has delivered a perfect routine in his last two performances of "On Love: Eros" but it looks like he will even level up his short program this time to get more points for technicality.

Meanwhile, Japanese pro skater Nobunari Oda will be featured as commentator of the short program. We heard his voice in "Yuri!! on Ice" episode 11 preview and the boys sound excited to see the four-time Grand Prix final medalist.

We are entering another anime season! Here are some recommendations for anime series in the Winter 2017 line-up.