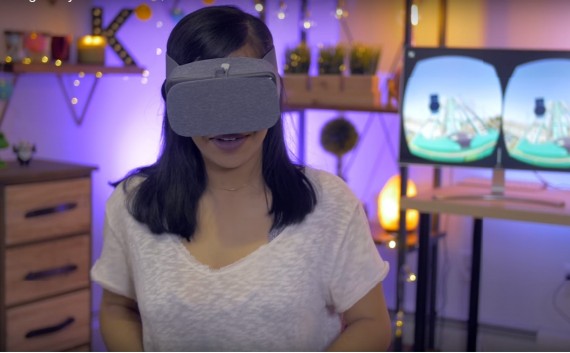 A photo of a woman using the Google Daydream VR. (Photo : Krystal Key/YouTube)

True to its promise, Google is getting closer to the 50 Daydream apps it has promised to complete by the end of the year. Apparently, the giant tech company, Google has launched 7 new apps for the Google Daydream VR. Here are the new apps that you might want to know about:

According to the The Verge, the Google Daydream VR headset is featuring two new video apps. The first video app is the NextVR where users can stream concerts and sporting events in virtual reality (Yeah, just imagine being on courtside at a NBA gamer through the lens of your Daydream VR). The second new video app is HBO which will let HBO Now and Go subscribers watch TV on a virtual big screen in Google Daydream.

According to reports, Google is giving the Google Daydream five new game apps. Sound great, right? Sad to say, but no because apparently, out of the 5 new game apps, only one if for free and with no in-app purchases.

The free game is titled: Lego Brickhead Builder VR. This game is created by Lego and has 2 playable modes. In the first mode, you play with lego figurines and pre-fabricated objects. You will also watch them interact to unlock new characters and props. In the second mode, you have this virtual building board where you create stuffs using legos. Basically, I think it's kind of similar to the game Minecraft if you ask me.

Now we get to the paid game apps. For its paid game apps, Google Daydream is offering Gunjack 2: End of Shift where you control a turret shooter set in EVE universe. Next offer is Wands, a multiplayer magic dueling game. Another paid offer is Underworld Overlord which is a tower defense kind of game where you play as an evil lich that uses traps and monster to attack waves of dungeon-crawling adventurers. And lastly, the final offer presented by Google is the Layers of Fear: Solitude which is a horror exploration game where you play as a mad painter venturing through a surreal mansion to complete his final work or art.

It is reported that there are 2 apps coming very soon for the Google Daydream, one for the video apps and one for the game apps. The upcoming video app is Netflix which is sure that many users will love. For the upcoming game app, it is the Need For Speed: No Limits VR. Yes, from the same legendary, classic Need For Speed franchise that all racing care video game fans loved throughout the years. About when exactly will these two apps will be available in Google Daydream VR is still unknown, but is surely to come very soon.

Body Weight. Without a phone attached, the Daydream weighs only 220 grams. As for the Oculus Rift, it weighs 467 grams. Personally, I think I will have a stiff after using the Oculus Rift after 40 minutes. I will give this round to the Google Daydream.

Features. The Google Daydream's features depend solely on the phone attached to it. As for the Oculus Rift, it features are 3D audio, refresh rate of 90 Hz, lets the user experience PC gaming, and it has a new controller, the Touch controller worth $199.

The year 2016 has been the year where we have witnessed the outbursts of a lot of virtual reality headsets such as the Sony PlayStation VR, HTC Vive, Oculus Rift, and Google Daydream. Although all the mentioned headsets are meant to offer a great VR experience, there are actually some differences between these various VR headgears. In this head to head comparison post, we compare one of the pioneers of VR, the Oculus Rift, against one of the newcomers, the Google Daydream.

Oculus Rift Touch Review: Controller Puts The Wearable Back In The VR Game

As one of the earlier VR releases this year, the Oculus Rift saw its competitors win over more of the public than it did itself. However, its new Touch controllers shine the spotlight back on the older favorite.

Google Daydream And Pixel XL: Are The Market's Latest Entries Worth A Look Before 2017?

Google definitely started to expand its range of services this year - especially with the introduction of the Google Daydream and Google Pixel XL. But just how do they stand out in the industry?

HBO Max is Surprisingly Awesome but Is it Really for Everyone?

HBO Max is among the many paid streaming services available today. Together with Netflix, Disney+, and Apple TV Plus, they provide endless hours of awesome entertainment.