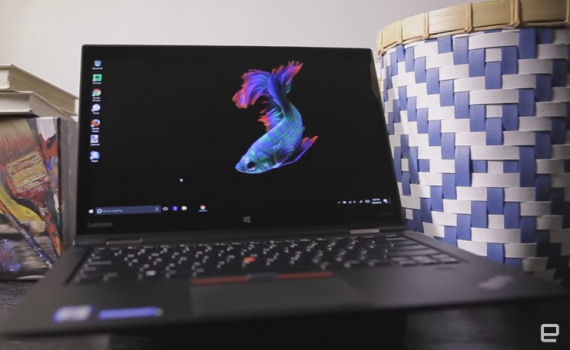 Lenovo's ThinkPad X1 Yoga is one of the best laptops of 2016. (Photo : Engadget / YouTube)

The year 2016 is close to its end and it this is a good time for a retrospective view of the best laptops that arrived on the market this year.

MacBook Pro 2016 was disappointing professional users in many ways, despite the huge Apple marketing campaign. According to The Verge, Microsoft's Surface Book isn't either the dream video-editing machine the professional users were hoping for. Then, beside of these two well-known models, what are the best laptops of 2016? We will try to respond to this question bellow.

Alienware is a personal computer maker company specialized in machines dedicated to gaming. Alienware 13 R3 is one of the company's best smaller gaming laptops. While previous attempts to create a small powerful gaming laptop just didn't cut it due to high prices, lackluster screens and poor performance, the Alienware 13 R3 is a really good machine.

With this model, Alienware comes up with a new version of its previous 13-inch gaming laptop. This newly released iteration is better suited for gamers' requirements. The Alienware 13 R3 got an OLED screen that makes it an amazing platform to play games on.

The gaming laptop also comes with an excellent keyboard, another important part from a gamer's perspective. The graphics and video capabilities of the machine are powred by an Nvidia GeForce 1060 GPU powerful enough to run all the big VR headsets.

The only things that are missing, perhaps, are just a couple of extra USB ports that would be useful for the Rift/Vive and accessories. But, aside of this presumed flaw, there are no other downsides we could find.

According to CNET, the ThinkPad version of the Yoga is one of the best of Lenovo's range of Yoga products. The laptop comes with an original design. Users can fold it into its tablet mode, because the keyboard retracts into the body. In fact, the keyboard tray rises up flush with the keyboard, rather than the keys retracting.

This professional version of the Yoga is not only featuring a revolutionary design, but it is also one of the few laptops available with an OLED display. This feature makes it more expensive, of course, but it is a price worthy to pay for this stunning looking laptop. According to tech experts, this is one of the best laptop-style hybrid currently on the market.

Hewlett Packard (HP) has a good reputation on the laptop market as the producer of high-performance and efficient machines. While the company has been pushing as a high-end flagship its 10mm-thick Spectre 13-inch laptop, the HP EliteBook Folio G1 might be a better choice model from HP's professional line.

It's true that the Spectre has an impressively thin design, but the laptop comes with very limited configuration options and it lacks a touchscreen. On the other side, the Folio G1 uses Core M instead of Core i-series processors and it is a little bit thicker, but it's still very attractive and slim. It even has 180-degree hinge for lying flat on a table and offers a 4K touchscreen option.

Since it was launched by Apple not long ago, MacBook Pro 2016 received some mixed reviews.

Review On Microsoft Surface Book i7

According to reviews, Microsoft's Surface Book i7 is a powerful machine with an impressive configuration.

Lenovo's wide array of 2-in-1s makes it easy for everyone to choose a hybrid laptop that fits them.

The MacBook Pro 2016 and the Lenovo Yoga 910 are both powerful and premium laptops, but which one is more worthy of your money?

Best Affordable Laptops At Around $800 And Less

You can get great laptops at great prices if you choose wisely.