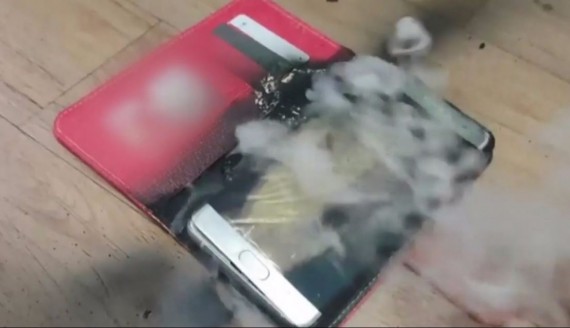 With Samsung's total disconnection plan for the remaining unreturned Note 7, it's safe to say that Samsung is eager to zero out the use of the phablet. It's also safe to say that there really are a bunch of rebellious owners who want to keep their Note 7 as long as they can. With that said, it's already undeniable that there are a considerable amount of people who are too attached and too reluctant to return their phablets despite the recall. This could actually be a forecast for the success of the Samsung Galaxy Note 8.

It's worth noting that Samsung is doing all it can to have people return their Note 7. To make that possible, the company is making the remaining unreturned phablets practically useless. The unreturned Galaxy Note 7 devices won't only be getting an update that would limit it from being fully-charged, the devices will also be banned from networks. Meaning, the phones can no longer call or text as they will be disconnected from network providers.

Furthermore, the said phones will likewise no longer have WiFi and Bluetooth functions, GSM Arena reported. The phones are still allowed to call 911 though. Nevertheless, it's practically a bad idea for people to keep their Samsung Galaxy Note 7 without all these improtant functionalities.

Samsung Galaxy Note 8 As The Next Big Thing

Knowing that there are rebellious Galaxy Note 7 users who aren't exactly very obedient to Samsung's instructions, it's easy to assume that the Note 7 is simply irreplaceable. Despite Samsung's efforts to refund the difference and give people an offer to get them to have the Galaxy S7 or S7 Edge instead, there are still Note 7 users who choose not to participate in the recall. This could only mean one thing, the Galaxy Note 8 will be a big thing next year as reluctant returners of the Note 7 will come lining up for the next Note phablet.

Right now, there hasn't exactly been a lot of rumors and leaks about the Note 8. It's probably the imminent arrival of the Galaxy S8 that overshadows the Galaxy Note 8. Needless to say, it's safe to assume that Samsung will probably be making the Galaxy Note 8 their best Note ever, at least if they aim to avoid last year's mistakes and to lure people from trusting the phablet once again.

Technically, Samsung's effort plus customers' apparent admiration to the brand equals success. There's a good chance that the next Note phablet will be a success, in contradiction to early predictions that Samsung will start losing fans after the Galaxy Note 7 controversy. The company may have lost money during the recall, but there's a good chance that the same thing will no longer happen with the Note 8.

Right now, the best thing fans can do is to wait for the release of the Note 8. While the phablet is quite an exciting release, Samsung hasn't really given people solid information about the device. With that said, we can just all wait for its arrival and hope for the best. PC Advisor says that the Samsung Galaxy Note 8 could highly likely be released this August 2017.

A new Samsung device has been spotted on benchmarking site FCC. The device is believed to be Galaxy Tab A 8.0 (2017) that will be powered by a Quad-core Qualcomm Snapdragon 435, 2 GB RAM and 8MP Camera.

According to a fresh leak, the next generation of Note series, the Galaxy Note 9 would possibly sport a more powerful Exynos chipset.