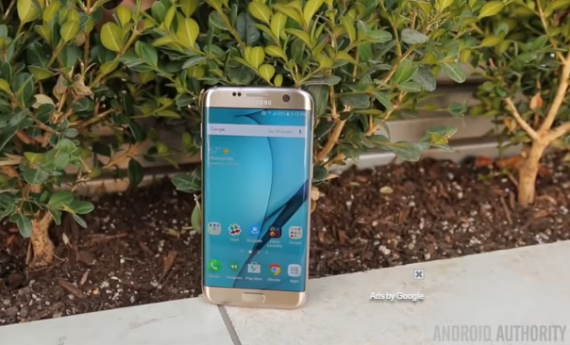 Samsung is off to release new smartphones this 2017. (Photo : Android Authority / YouTube)

Samsung might have faced every manufacturer's worst nightmare this year. However, it looks like the company is ready to move forward and leave the infamous Note 7 controversy behind. Samsung is off for a good start next year as the Galaxy S8 is expected to be announced early 2017 at around February. The Note 8 on the other hand is also a sure-go despite the cancellation rumors, although its launch would still probably fall on mid or late 2017. Nevertheless, as of now, there have already been a bunch of predictions and rumors about Samsung's upcoming flagship devices.

Next year's Samsung Galaxy S8 could come with less bezels and no home button. CNET says that the next Samsung flagship will have about 90 percent display, thus ditching out the classic home button. However, this doesn't mean that the fingerprint sensor will now be eliminated or transferred to the phone's back. What's expected to happen is that the Galaxy S8 will have an optical fingerprint sensor tucked underneath the phone's display. Furthermore, 4K resolution is also a big possibility. The Galaxy S7 has superb display resolution so the next model is also expected to boast of the same trait. The S8 might even bump up from a 2560 x 1440 pixel resolution to a 3840 x 2160 pixel resolution.

Further rumors suggest that the S8 would once again come in two variants. There are reports saying that both of these variants could have curved edges and this rumor is getting mixed reactions from Samsung fans. Additionally, the Galaxy S8 could also boast of pressure sensitive display, dual camera and an AI of its own called Bixby.

Luckily for Note fans, the Galaxy Note 8 is still coming up. You might have heard before that the Samsung may halt the production of new Notes in light to the Note 7 incident. However, as it turns out, those rumors are far from true and the company is still moving forward with the Note series. Apparently, the Galaxy Note 8 is mentioned in Samsung's Galaxy Upgrade program for South Korea Note 7 recall participants. As per a GSM Arena news, Note 7 owners who exchanged their recalled device for an S7 or S7 Edge devices are all qualified for S8 and Note 8 discounts.

Right now there still aren't a lot of new things heard about the Galaxy Note 8 and it's probably because it won't be launched anytime soon. It's the Galaxy S8 that's currently making rumor headlines. Nevertheless, it's almost certain that the Galaxy Note 8 will considerably improve over its predecessor. For one, it could have a removable battery as it could minimize battery-related problems.

Samsung Galaxy S8's cameras are also expected to be improved, with new camera gestures to come with it. An improved stylus is also a very big possibility. As for the phablet's design, a slimmer body with less bezels are both possible as per Tech Radar. The phone could also boast of Samsung's rumored AI assistant.

Needless to say, the Galaxy Note 8 is expected to be powered by next year's best processors. The company could produce a Snapdragon 830 powered Note 8 and an Exynos processor powered Note 8 to release to varying markets. Overall, one thing is for sure, the Galaxy Note 8 will be Samsung's best Note ever considering the quality assurance that they may have put on the development of the phablet. Not to mention the added features that the company could include in the hopes of regaining people's trust for the Note series.

Many people might not know this, but putting a screen protector on your Samsung Galaxy Z Flip could actually void your warranty.