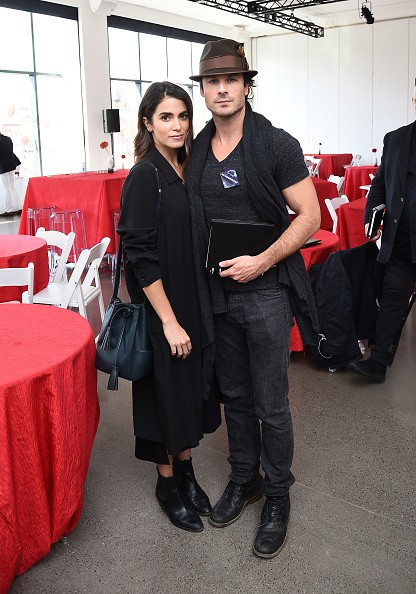 Like almost every Hollywood celebrity couple there is, "The Vampire Diaries" star Ian Somerhalder and his wife Nikki Reed of the "Twilight" fame have been plagued by countless rumors. Apparently, fans of Somerhalder and his former "TVD" co-star and ex-flame Nina Dobrev still cannot accept the fact that the actor is now a happily married man. The issues surrounding the trio range from marital conflicts between Somerhalder and Reed mainly rooted from Dobrev's supposed comeback on "TVD" to the couple's alleged divorce plans.

Yet, with endless speculations on their marriage, Somerhalder and Reed have stayed classy and positive through it all. We can even say that the two don't seem to be fazed at all by the ongoing rumors about their relationship, which started from a whirlwind romance a few years ago. Also, unlike other celebrity couples who prefer to keep their romance and marriages under the radar, Somerhalder and his wife seem to have no problem expressing their affection for each other publicly.

A case in point is the duo's overly romantic messages over Facebook days ago, during the actor's 38th birthday. On Thursday, Dec. 8, Reed posted on her Facebook page an adorable photo of Somerhalder as a toddler along with a lengthy tribute message, wherein she described their sweet little moments together as husband and wife. In it, the "Twilight" actress called her husband "my human, my partner, my guy, my better half," and shared that her growing old with the actor is just her "favorite perk."

Not to be outdone, the birthday boy himself proudly shared his wife's tribute on his own Facebook page and gave his equally sweet response. "This is, the sweetest birthday note any man could ever get from his wife. Nikki Reed thank you my human. My heart is so full with your words and their meaning. I love you. Thank you for making this the... Best. Birthday. Ever," the "Lost" actor wrote.

Surely enough, the pair's posts quickly became viral and attracted thousands of "likes" from fans who find their relationship sweet and inspirational. As if their intense public declaration of love isn't enough for fans to root for them, the couple was spotted the day after attending an event for a worthwhile cause. As reported by Daily Mail, Somerhalder and Reed stepped out in style in Atlanta, Georgia on Friday night, Dec. 9 to attend the 25th Annual Captain Planet Foundation Gala. The couple looked chic and gorgeous together while posing together for some snapshots.

With their recent public sightings, social media posts and interviews, Somerhalder and Reed must have proven how their marriage is still very much intact and healthy and how the divorce rumors about them are quite far-fetched in reality. Understandably, the buzz may have been more persistent than ever following reports of Somerhalder's supposed reunion with ex-girlfriend Dobrev on "The Vampire Diaries." Still, Damon and Elena's fans should take note that the ex-couple's reunion, if ever it pushes through, will just be on a professional level and not a romantic one.

That being said, "The Vampire Diaries" fanatics should also not keep their hopes high when it comes to the supposed reunion of Damon and Elena in "TVD" season 8. In a recent interview with Variety, Somerhalder talked about the much anticipated comeback of Dobrev in the CW vampire series. When asked whether the actress will indeed be back on "The Vampire Diaries" season 8, Somerhalder said, "I don't know. I have zero idea. As a producer, I do have a lot of information and then there's a lot of information I don't have. I want the audience to be happy, but I also am very pro human."

As his character is continuously wreaking havoc in the series, Somerhalder is not looking forward to a happy ending for Damon. And since a Delena reunion can be one picture of a happy ending, the actor does not seem to keep fans disillusioned. "I don't think these guys should have the ability to wreak havoc, kill everybody, ruin the lives of so many and then get out with a happy ending. I think the happy ending is that we got to go on this amazing ride with these two guys. They've lived long enough," he concluded.

The Salvatore brothers just became Cade's new servants and it will be a tough road ahead for the two as "The Vampire Diaries" season 8, episode 8 comes back in January. What will happen to Steroline couple?

“The Vampire Diaries” season 8 led to the engagement between Stefan and Caroline although there seems to be a lot of obstacles on their path to happiness. Paul Wesley shares his thoughts about Steroline’s fate.

I. Marlene King has invited Julie Plec over for coffee to talk about making television and this has speculated rumors that a crossover between "The Vampire Diaries" and "Pretty Little Liars" might just happen.

The Vampire Diaries: Stars Reflect On Filming The Series Finale

The Vampire Diaries series finale was not teasing the fans. After making viewers think Damon (Ian Somerhalder) compelled Stefan (Paul Wesley) into letting the eldest Salvatore sacrifice himself to save Mystic Falls, "I Was Feeling Epic" delivered the devastating twist that Stefan was actually the one to die in TVD's final hour.

The premiere of "The Originals" season 4 is almost here and fans will see Hayley bringing the cure to revive Elijah and his siblings. They will go on a mission to save Klaus from Marcel as his reign in New Orleans is being threatened by new vampires.