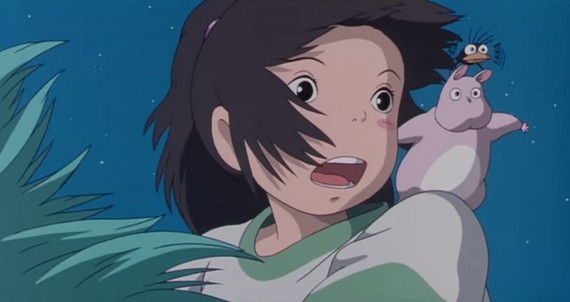 Studio Ghibli and Hayao Miyazaki's all-time classic movie, "Spirited Away" makes its way back into U.S. theaters and have ranked well in the box office. (Photo : Madman/YouTube)

One of Studio Ghibli’s most beloved classic animated movies has made its return in theaters. “Spirited Away” was once again screened in select theaters all over the United States. Even after several years after its official premiere, the movie continues to draw in millions of viewers all around the world.

Guerilla Kids International Distribution Syndicate (GKIDS) has just announced that Studio Ghibli’s classic film, “Spirited Away” has ranked fifth in the U.S. box office. GKIDS is an American film distributor based in New York and it was the responsible for bringing back the said animated films to cinemas in the United States. “Spirited Away” took the fifth spot on the weekend it returned, surpassing that weekend’s record of Walt Disney and Marvel movie, “Doctor Strange”, which fared with roughly $499,818 according to Box Office Mojo.

“Spirited Away” is one of Hayao Miyazaki’s most celebrated and renowned animation creations. The said the animated film was screened back in U.S. to celebrate its 15th anniversary since it was released. It was released on a limited run in select theaters on Dec. 4 and Dec. 5, showcasing both the English-dubbed version and the original Japanese version with English subtitles, respectively.

“Spirited Away” premiered in Japan in July 2001 and it has grossed $289.1 million at the box office against an estimated $15 million to $19 million budget for the film production and promotion. It became the highest grossing film ever in Japanese History. It was also the first Japanese film to reach $200 million at the worldwide box office prior to its release in the United States. From 2001 until 2004, the movie has been given several recognitions from various awards ceremonies all over the world. It has mainly been awarded for its animated feature and soundtrack.

The said animated movie still ranks high in several various movie sites such as Rotten Tomatoes, IGN, and Metacritic, hailing it as one of the highest rated movies of all time. In 2010, it even ranked 10th in Empire Magazine’s The 100 Best Films of World Cinema. The animated film had become a phenomenon embraced by the world and earned worldwide praise time and time again for being, quoting Orlando Sentinel’s critic Jay Boyar, the perfect choice of film for a child who has moved into a new home.

The praises and the accomplishments of “Spirited Away” can go on and anyone who saw the movie knew that it deserved every compliments and award it received. “Spirited Away” is a Japanese animated fantasy film created by Miyazaki and produced by Studio Ghibli, taking his inspiration from his associate’s ten-year-old daughter who came to visit him every summer. After two of his proposed works being turned down, Miyazaki finally worked on the production for “Spirited Away” in 2000 and even had to reconstruct the story after realizing that the original one would run more than three hours.

“Spirited Away” is an animated film that tells the beautiful story of ten-year-old Chihiro Ogino, who went on a quest towards the mystical spirit world to save her parents. She then meets the charismatic boy, Haku who turns out to be the powerful Spirit of the Kohaku River. She and Haku team up in an adventure to save her parents and to find a way for her to escape the spirit world.

"Ronia The Robber's Daughter" will be streamed soon on Amazon Prime. Check out details here.

Studio Ghibli's rare gem of a movie, "Ocean Waves" will be making its theatrical premiere in North America soon. Find out when and read about Hayao Miyazaki's concern regarding AI-driven animation.