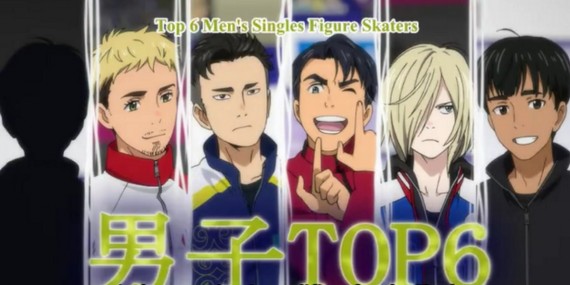 With Yuri's silver finish in the Cup of China, he edged out Mickey who was third in the Rostelecom Cup and became the sixth athlete to qualify in the Grand Prix Final. (Photo : FREE T - The Daily Show/YouTube)

We will finally witness the most awaited Grand Prix Final in "Yuri!!! on Ice" episodes 11 and 12 but before that, let's have a rundown of all finalists competing for the gold. Bets are on Yuri, Yurio and JJ but all six finalists are equally talented. Below are the top six men's singles figure skaters:

He is the frontrunner in the competition with two golds so far, but sorry for him, there's an unspoken anime/manga rule that says: "The first will be the last, the last will be the first." Truth be told, I'm quite relieved that Yuri is currently the last in the standings. Growing up in a family of skaters, his confidence is unmatched and he always has perfect performances, but Yuri and Yurio still have a chance to beat him by adding some surprises in their programs.

It will be our first time to see Otabek skate in "Yuri!!! on Ice" episode 11 so he may be put in the spotlight. Otabek is the hero of Kazakhstan who clinched third in his senior debut during the last Grand Prix but his performance and style are still a mystery until now. He seems like an unsociable bad boy at first but after rescuing Yurio from his fan club in "Yuri!!! on Ice" episode 10, it was revealed that he was actually just shy.

Personally, my bet is on Yuri but I find myself wavering every time I see Yurio skate. I'm just a few millimeters away from signing up with Yuri's Angels. With his two consecutive loss to JJ even in his top form I think he realized what he must do to defeat him. He might add more complex jumps in his programs in "Yuri!!! on Ice" episodes 11 and 12 -- he is talented in complex jumps and combination spins anyway.

Chris usually does better in the free skate so he might have some mistakes. I'm more worried about how his concept coincides with Yuri's especially on the sex appeal. He first believed that he has no real competition in the Grand Prix after Viktor took a break but he had his enthusiasm back after competing with Yuri in the Cup of China so there are bound to be some improvements in his performances.

As soon as he won gold in the Cup of China, he was eliminated in the Grand Prix first placer candidates in my list. Anime rules a side character cannot steal the spotlight from the protagonist twice. Either way, I'm sure he would deliver a lively performance of "Shall We Skate?" and "Terra Incognita" from "Yuri!!! on Ice" fictional movie "The King And The Skater."

I can't believe he's actually the second oldest among these skaters as he certainly looks younger than the others, partly because of his personality. It's no question that he would have a perfect performance in the short program, we have seen him nail it flawlessly twice already. The biggest gamble is on the free skate on "Yuri!!! on Ice" episode 12, Yuri decided to include a quad flip, which he hasn't even perfected yet, to have a higher base score than JJ. If Yuri wins maybe we would be able to see a glimpse of his marriage with Viktor as fan service.

TYPE-MOON's "Fate" series has a total of five projects listed for 2017 including TV specials, movies and an anime series. The series originated from "Fate/stay night" visual novel.

The six finalists had some fun time before the Grand Prix Final in "Yuri!! on Ice" episode 10. Yuri and Viktor exchanged couple rings in front of a church while Yurio gained a new friend.