2017 Toyota Prius Prime: Everything You Need To Know 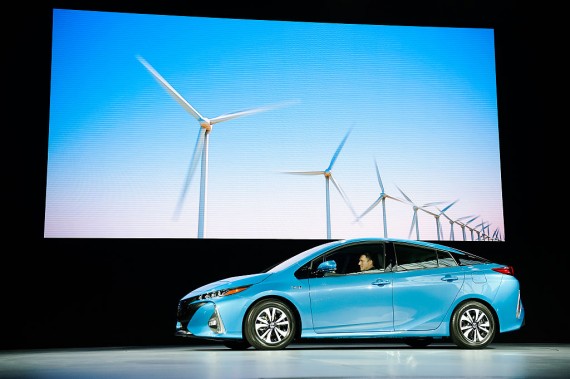 The Toyota Prius started the road to hybrid vehicles. Utilizing both a petrol engine and an electric motor to optimize fuel performance. The 2017 Prius Prime is sure to be better than the previous versions. (Photo : Photo by Bryan Thomas/Getty Images)

As the year is nearing its end, new and upcoming cars are entering the scene. The year 2017 is already showing great promise as cars with better technology and fuel economy ratings have slowly been announced throughout the second half of 2016. One that gets the attention of fuel conscious folks is the 2017 Prius Prime hybrid car from Toyota.

Toyota Is All About Competition

The 2017 Prius Prime is Toyota's answer to cars such as Chevrolet Volt, the BMW 330e, and the Ford Fusion Energi. Toyota stated that the Prime is the best Prius yet to arrive. The Toyota Prius, being the poster car of all hybrid cars, has proven itself as the true face of hybrids. But, how will it perform against the rest for 2017?

The Prime Comes Standard With A Carbon Fiber Hatch

The 2017 Prius Prime is a second generation plug-in Prius, The new name was given after the stylish and highly capable Prius Liftback became a success. Similar to the Liftback, the Prius Prime features four doors and a rear hatch. The Prime is given a bigger battery pack than the liftback, a charging port, and a huge 11.6-inch portrait-oriented touchscreen is also added. One notable difference between the Prime from the Liftback is that its rear hatch is now made out of carbon fiber that shaves off eight pounds from the vehicle's total weight.

Hybrids Do Not Need To Feel Like A Hybrid

Another factor of the 2017 Prius Prime that makes it one of the best hybrids is its ability to, well, not feel like a hybrid. The Prime's new platform gives a driving sensation similar to a luxurious Toyota Camry or a Toyota Corolla. The driving experience is more engaging to the driver compared to its predecessor. The Prius Prime, though, has to seat for four persons only due to a sacrifice that needs to be done because of the heavy battery.

Although the 2017 Toyota Prius Prime only has 121 horsepower, it is more than enough for a daily driver. The vehicles 1.8 liter four cylinder engine that can also be found on the liftback version is more than capable of fulfilling your daily drive to the office, the grocery or back home. The Prime's electric range scores a massive 133 miles per gallon equivalent. The electric score, however, may vary depending on how you drive, and how far your go.

According to Green Car reports, they were able to cover 279 miles on their usual test route, which is a mix of highway, local and suburban roads. The test results show that the 2017 Prius Prime achieved 69.2 miles per gallon over a total of 83 miles coverage. The results comes from the combined usage of both the electric motor and the petrol-based engine.

Noise during travel is not an issue with the 2017 Toyota Prius Prime hybrid. During the test drive, the editors of Green Car Reports noticed that the sound could be heard from the outside, but not inside of the cabin, a feature that its predecessor failed to do. The 2017 Prius Prime from Toyota may not be the fastest hybrid vehicle, but its ability to switch between electric and petrol gives it hope that it may not only be the best Prius but possibly the best car out of all the hybrids that will come in 2017.

The new 2017 Chevrolet Bolt has been receiving awards from different prominent publications over the previous months and may be getting another one. This little EV may be bigger done we think it is.

The International Institute of Highway Safety just announced the results of the tests they conducted on which car brands and models made it to their top list of safest vehicles for 2017.

Those reconsidering getting the Tesla Model 3 can take a look at the latest Nissan Leaf, Chevy Bolt and Toyota Prius Prime.

The 2017 Toyota Prius outshines its rivals with a range that even beats the 2017 Chevrolet Volt's 420 mile range.