MacBook Pro Touch Bar Review: Everything You Need To Know About Apple´s Most Controversial Feature 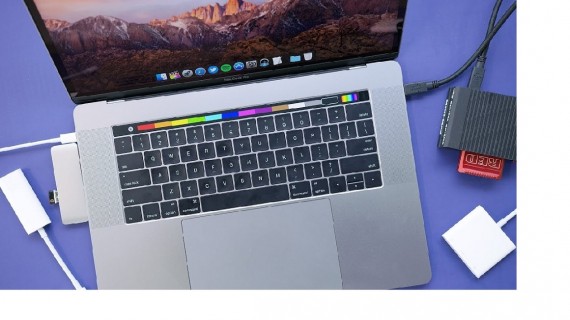 The 2016 MacBook Pro model is the first Apple laptop to not get recommended by the Consumer Reports. (Photo : Marques Brownlee/YouTube)

The MacBook was one of the most expected Apple´s products this year, and even when everyone was waiting for new specs and features, it was a tremendous surprise when it was known that this laptop would have a Touch Bar where users could do a lot of things in an easier way. Now that the product has been released, there still some divided opinions about this feature, and it remains unknown how successful it could be. In order to clear some doubts, here´s a review of the controversial MacBook Pro Touch Bar.

The MacBook Pro Touch Bar is a thin OLED display that replaces the function keys, allowing the user to control things like the laptop´s brightness, sound, and media playback, in addition to many other digital buttons to help using apps a lot easier. Although it seems as a futuristic feature, this was actually a risky move from Apple, since removing something that has been used for decades could have unexpected reactions from users that don't like major changes.

Another great detail about the Touch Bar is that is made up of three elements at its core, the first is a small strip of semi-permanent icons on the right, the second is a fingerprint sensor that is located to the right of the previous element, and the third is a dynamic panel that changes depending on what you´re doing and the app you´re using.

The interesting thing about this third element is that it represents the majority of the MacBook Pro Touch Bar, and it shows its great capacity when you´re using Safari since this feature displays open tabs, forward and back controls, a search command, and a new tab button so you can roll easier than ever.

With the first element, you can add numerous buttons to access Siri, see your notifications, adjust volume and screen brightness or even take a screenshot. On the other hand, the fingerprint sensor works with Touch ID, which can be used to buy items online and unlock the laptop. In fact, this can also recognize the prints of multiple users.

The Touch Bar´s Hardware Is A Perfect Design

The MacBook Pro Touch Bar´s hardware is even more beautiful than you can imagine since its screen is bright and quite easy to see in any light condition. This feature is a 2170 pixel by 60-pixel touchscreen display, and it reproduces the Wide Color DCI-P3 gamut with Retina resolution. If this doesn't seem surprising enough, the MacBook Pro Touch Bar is also optimized for typical viewing at a 45-degree angle.

And you don´t have to worry too much for the huge change, since if you´re one of those users that miss the function keys, the Touch Bar can turn to the standard strip of these 12 buttons if you hold down the FN key. Otherwise, you will have the opportunity of using a feature that allows interacting with the software and many programs as you could never imagine it.

This is exactly why there are so many apps for the MacBook Pro since you can actually do anything you want with it. As it was reported in a previous article, there are some apps that allow running games like Pac-Man or Doom, playing some music instruments, and the option to switch between the open programs and applications on the laptop without having to cycle through them.

In fact, you can now use Adobe Photoshop on the Touch Bar, which gives the chance of editing the images with your fingers instead of the usual way. Naturally, this can be seen as a bet that would probably end up as the touchscreen released in the first iPhone, and many could actually believe that every future laptop would sport a Touch Bar, but the truth is that this is not a perfect feature yet.

It´s Not A Feature For Every Kind Of Users

While you can do a lot of things with the MacBook Touch Bar, this doesn't mean that every single user would have an amazing experience with it. In fact, given the characteristics of this feature, there are some professionals that would actually have a hard time with it, since this innovation cold be extremely annoying.

The reason is that it´s incredibly easy to accidentally hit it instead of the Delete Key, which means that this feature could actually be your worst enemy if your job consists of writing a lot of things. In fact, the Touch Bar actually offers the same word suggestion when you´re writing as the iPhone, but its quality is not exactly great, which mean that assisting typing is not a field in which this feature have something important to say.

Although the MacBook Pro Touch Bar is an incredible innovation that could definitely increase a laptop quality to a whole new level, there are still many details that needed to be fixed in order to make this happen and start another tech revolution. For now, Apple just needs a decent response from customers so it could have time to solve every single flaw, because unless you are a video or audio editor, this feature might be just a futuristic luxury instead of a groundbreaking invention.