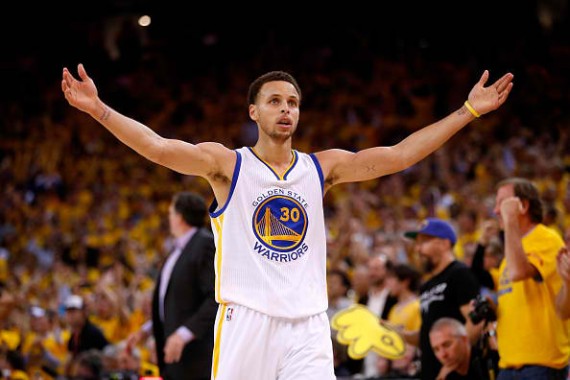 OAKLAND, CA - MAY 27: Stephen Curry #30 of the Golden State Warriors celebrates late in the fourth quarter against the Houston Rockets during game five of the Western Conference Finals of the 2015 NBA Playoffs at ORACLE Arena on May 27, 2015 in Oakland, California. (Photo : Photo by Ezra Shaw/Getty Images)

The trading block is overflowing with rumored NBA players who are possibly moving to another team starting Dec. 15 until February. Among the top stars taking the spotlight in the recent NBA trade rumors is the Golden State Warriors' Stephen Curry. He was already being speculated to head to the NY Knicks or the Celtics before, but now speculations say he might soon be bonding with Dwyane Wade and Jimmy Butler in the Chicago Bulls.

Stephen Curry is undeniably one of the best NBA players of his generation. He successfully made a name after he suffered from a recurring ankle injury in 2011 and 2012. Though his records dipped to a low 14.7 points per game after several surgeries, he came back in a superstar mode in the 2012-2013 NBA season which recorded the first highlights of his NBA career. He then made his career high of 54 points, made his first appearance as an All-Star player, became the GSW's leader in three-point shooting and found himself his Splash Brother who, since then, made the Warriors prominent in the league.

So far, Curry has proven himself as a remarkable player in the NBA becoming the first star to earn the MVP title in a unanimous decision from over a hundred panel members. Nobody in the league could also beat him at three-point shooting. At 28, Curry is definitely a player sought after probably by all NBA teams once he makes himself free for acquisition. So as he goes on free agency in 2017, several teams are already falling in line to give him an offer most especially that he opts for unrestricted free agency. Does this mean we could finally see him playing for another team next season?

The latest trade rumor headlining the two-time MVP player is claiming so. He is rumored to join the Chicago Bulls roster for the 2017-2018 NBA season. Some rumors though have it that he is joining the team through a trade where Rajon Rondo will be the swap piece. Curry teaming up with other great players like Wade and Butler is predicted by many to put the Bulls on top of the league once again.

The Bulls lost its spark after the greatest NBA player of all time retired. Michael Jordan certainly made the Bulls a force to be reckoned with in the 1990s and made NBA renowned worldwide. If NBA is to be mentioned and so is the Bulls, Jordan is definitely the first person to come to mind. Imagine a player making the highest records in the league. Six times as MVP finals, six times champion, five times NBA MVP, 14 times All-Star, and a lot more achievements under his name -- number 23 is definitely a legend in the league.

Jordan created the greatest victories of the Bulls. Although Kobe Bryant also did well, the golden years of the franchise were led by Jordan. Now that he is already behind the court, the time has come for the younger generation to redeem the Bulls and put it back to its glory days. Could the Wade, Butler and Curry tandem put the new generation bulls to the Jordan-generation franchise?

Wade is also a player who effortlessly made himself popular in the league. He led the Miami Heat to several years of championship along with former NBA star Shaquille O'neal and once with LeBron James. Now that he is with the Bulls, he is quite struggling to push the Bulls to the top of its conference but the franchise is still doing great as it is currently in sixth place at the Eastern Con. Nail them down there for a little more while and they will surely enter the playoffs.

Butler might not be the new Jordan of the Bulls but he is currently leading the scoring side of the franchise. Yet he obviously cannot do the job alone and would need more workers by his side to push the Bulls to a higher spot.

Stephen is probably the best shooter in the league and he continues to amaze observers as the current season rolls. Wade may not be able to tie with the best but he is among the most efficient shooters in NBA, plus he is great at assisting his mates for them to bring out their best play. Butler, on the other hand, is the Bulls' top scorer. With these three playing together, the scoring aspect will already be solved. Defense is a work in progress for the Bulls but offense is where they are best at. Hence, we might all see the Bulls outplaying the Cavaliers in the 2017-2018 NBA season.

The Boston Celtics are a hot subject of the NBA trade rumors currently spiraling. According to these rumors, Anthony Davis, Andrew Bogut or DeMarcus Cousins could possibly seen heading to the Celtics before the trade deadline.

Anthony Davis of the New Orleans Pelicans is once again being speculated to make a move before the February trade deadline. He is rumored to head to the OKC Thunder to join another superstar, Russell Westbrook.