'Yuri!!! On Ice' Episode 12 (Finale) Spoilers, Predictions: What Are Yuri's Chances Of Getting The Gold? Yuri Retiring After Grand Prix? 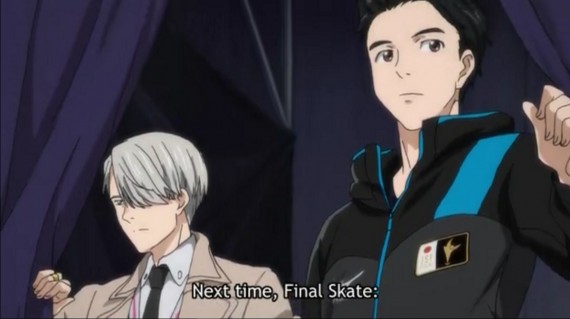 We will witness the Grand Prix Final free skate on "Yuri!!! on Ice" episode 12. I can't believe we are down with one last episode. Many fates are riding on these few minutes of Yuri's life. Yuri said this might be the last time he'll skate with Viktor beside him. Let's have an analysis of Yuri's chances of winning the gold.

There's a large difference between Yuri and Yurio's scores, 20.73 to be exact. If Yurio's score gets into the hundreds (which is very possible as he is currently in top form), Yuri will need to score more than 120 points. He needs a miracle for this. Yuri hasn't shown a perfect performance of the free skate yet so maybe this time he will. He is performing earlier than Yurio so it is also possible that Yurio will get some jitters after watching him skate and make a mistake or two.

Personally, I think it's too early for Yurio to win the gold. He is definitely a skating genius but he is still 15 while Yuri is 24. Yurio has a long way to go in his career while Yuri might not get another chance to join the Grand Prix in the upcoming seasons.

On the other hand, Otabek is also a very good contender. He just needs more than 6 points to get first place. We haven't seen his free skate yet and there's no clue on what it is all about but if it is as fresh and as technically difficult as the short program, he has a high chance.That would make a big twist in the finale. While fans are betting between Yuri and Yurio, this dark horse might just grab the gold on "Yuri!!! on Ice" episode 12.

After the cheers from fans, JJ might get back to his footing but it's too late for him. With the score difference, he needs to score more than 30 points higher than Yurio to get first place. I'm more disturbed by Chris' tendency to score higher during the free skate in his previous competitions.

The preview for "Yuri!!! on Ice" episode 12 showed a very determined Yuri preparing to go in the rink. Yuri vowed he would get the gold medal with the free skate and it looks like the two are not even talking while Yuri is doing some stretching. The night before the free skate, Yuri told Viktor "Lets end this," after the Grand Prix Final.

While it might mean he wants Viktor to go back to being an athlete after the Grand Prix (he noticed him enjoying watching the others skate), there are speculations that their relationship might also come to an end. How about that marriage talk after winning the gold in "Yuri!!! on Ice" episode 10?

I just wish Viktor won't agree with Yuri's one sided decision. Yuri said this will be the last event he and Viktor will face together but I get a feeling Yuri might retire after the Grand Prix Final and the season 2 might follow Viktor convincing him to compete again.

"My Hero Academia" confirms season 2 will premiere in April. The sequel will start with the U.A. Sports Festival arc. Bakugo will be kidnapped by villains.