HP Stream 14-ax010nr Review: An Efficient Windows Laptop That Will Cost You Less Than $250 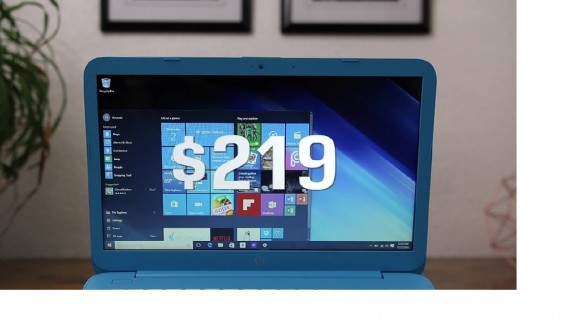 If you don't have a lot of money to spend on a laptop the HP Stream features Windows 10 and is a great affordable option.<br /> (Photo : Amanda Woolsey/YouTube)

One of the most annoying situations for many laptop customers is that some of these devices tend to cost much more when they offer outstanding capabilities for doing things that you don´t particularly care for, even to go far as to say that these features won't be useful. Hence, the HP Stream 14-ax010nr is definitely a dream come true since this is a Windows laptop that is not only characterized as efficient but also for being extremely cheap.

According to several reports, this device is a beauty that offers a decent performance to do the regular things as watching a YouTube video, reading an article or chatting with your friends. Also, the HP Stream 14-ax010nr is running on Windows 10, which means that you can install software like Minecraft, Microsoft´s Office, or even Apple´s iTunes.

Believe it or not, this is a cheap laptop that has an outstanding battery life that runs between 8 and 9 hours, which means that you won´t have to worry about running low for a long while. In addition to this goodie, the HP Stream 14-ax010nr wears a 32 GB of storage and doesn't have any problems with the expansion options, given the fact that this cheap laptop has a slot to introduce an SD card completely.

The Not-So-Great Details About This Windows Laptop

However, one of the lesser details about this Windows laptop is that the stereo speakers are not gonna blow you away and are average to a fault. Of course, this is nothing that cannot be solved with the headphone jack and the Bluetooth 4.0, that, the HP Stream 14-ax010nr offers.

Also, another issue that this cheap laptop have is that its processor is 1.6GHz Intel Celeron N3060, and its memory is 4GB DDR3 SDRAM 1,600MHz, which means that this device doesn't have the enough capacity to run any Windows software that could be too demanding. Although this is something that many people won´t like, the truth is that this won´t present any kind of issue as long as the HP Stream 14-ax010nr is only used for the regular stuff instead of something else like editing a video.

A Cheap Laptop With Nice Specs And The Perfect Feature: An Incredible Price

This Windows laptop has a decent keyboard and touchpad, and the enough amount of ports so you can plug a mouse or another keyboard. Also, the HP Stream 14-ax010nr offer an all plastic design with ridges on the lid, in addition to a beautiful blue color that extends to the entire laptop- and continues inside- with the little exception of the keyboard, which is actually bright white.

The best for the last: this Windows laptop only cost $220, and it has an 11-inch model that you can buy it at $200. If there´s a cheap laptop that wears decent specs and features and that could convince anyone because of an extremely affordable price, the HP Stream 14-ax010nr is definitely the one.

In recent days, Samsung send a letter to its employees claiming that there shouldn't be any more leaks regarding the Galaxy S8, since this is something that could be damaging to the company´s interests.

Galaxy Note 8 Vs Surface Phone Vs iPhone 8 Vs Huawei P10: Which Among These Flagships Is The Best Deal?

Although Huawei has always been characterized for releasing very cheap phones, this one seems like a little bit expensive. One of the biggest doubts is how much will the Note 8 cost.

Cheaper Alternatives To Microsoft´s Surface Studio: The Greatest All-In-One PCs You Can Buy At A Much Lower Price

The Surface Studio is expected to be one of the most incredible desktops of all times. However, there are many others that could offer similar specs and features at an affordable cost.

Check out the perfect computer desks for the flexible working positions.