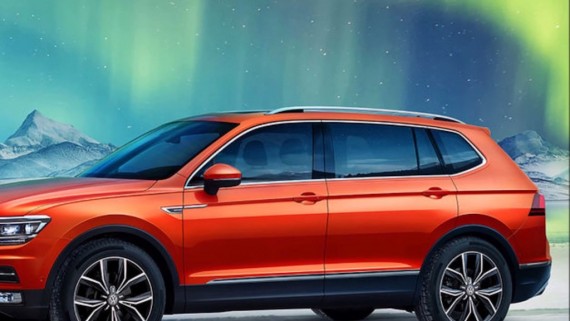 Volkswagen’s famous compact sports utility vehicle is an excellent family car for all. The Tiguan makes it even better with the emergence of a new stretched model, the Volkswagen Tiguan Allspace. <br /> <br /> (Photo : auto imagen/ youtube)

The second generation Volkswagen Tiguan, with its adopted new looks, instantly made huge fans out of people who want to travel in groups. The new Tiguan is a slightly better looking, boxier, and more defined version of its predecessor. It features a sleek and sporty exterior with a flatter surface that will definitely make heads turn with its eye-catching appearance.

Compared to the first generation, the Volkswagen Tiguan's cabin is bigger by 26 millimeters. The rear legroom has increased to about 29 millimeters which make adult seating more comfortable in the back. The rear bench can also slide and can be adjusted to 180 millimeters to give a total of 615 liters additional boot space which is significantly larger than its predecessors 145 liters. The entire rear bench can be dropped to reveal a total of 1,655 liters of luggage space, which is huge and perfect for those long distance travels. Moving to other parts of the interior, the Volkswagen Tiguan's Active Info Display is an interpretation of Audi's virtual cockpit. Various and critical information can be neatly seen on the 12.3-inch display that replaces the traditional analog gauges and instrument panel.

A Wide Array Of Engine Options

The Volkswagen Tiguan offers four diesel engine and three petrol engine options for its variants. Car buyers can opt to go for a fuel-efficient 2.0liter TDi that puts out 115 horsepower and a fuel economy rating of 60 miles per gallon, or for a more performance focused 2.0liter TDi Twin turbo diesel engine that puts out 237 horsepower and can reach zero to 60 miles in just 6.5 seconds. The Tiguan is available in four trim levels, namely; S, SE, SEL and the R-line.

The Tiguan Allspace Is Even Better

If those are not enough yet, a more recent version named Volkswagen Tiguan Allspace is now available. It looks the same as the Tiguan but with more space. Call it a stretched Tiguan if you must. The Tiguan, which is already perfect for small groups with its five seats and flexible cabin space, now becomes a seven seater. The Allspace is 4.3 inches longer and now features a third row of additional seats. With the seats folded down, the Allspace has a larger capacity than the 615-liter capacity of the Tiguan and will have an even larger boot space than the total 1,655 liters.

No TDi Engine For America

Like the Tiguan, the Volkswagen Tiguan Allspace will also have a wide choice of engine options. The six-speed manual transmission and the dual clutch gearbox will depend on which engine the buyer wants to choose. A TDi engine will not be available in the United States. More information will be released upon its Debut at the North American International Auto Show, or most commonly known as the Detroit Auto Show. Specifications may be different for America and Europe. The China and America Version will simply be called Volkswagen Tiguan, while the Europe version will be getting the Tiguan Allspace namesake.

Alfa Romeo Giulia Finally Goes Stateside: How Will It Match Against Other Car Brands

Italian car brand Alfa Romeo introduces the new Giulia to the United States. Will their new 350 horsepower sedan be able to beat the likes of BMW, Audi, and Mercedes-Benz?

Volkswagen, with a scandal dating back to 2015, still not done recalling all affected vehicles and still have court hearings scheduled. Despite all issues, VW is still gaining in sales.

The Volkswagen Tiguan, which had its production debut in 2007, just received a new version in the form of the AllSpace. The name Tiguan was derived from the German words that means Tiger and Iguana.

Audi is once again taking things to another level as it introduces its Q8 Concept, an SUV that looks like a coupe.

Honda brings home the bacon as it earns Truck of the Year Award at 2017 Detroit Auto Show.