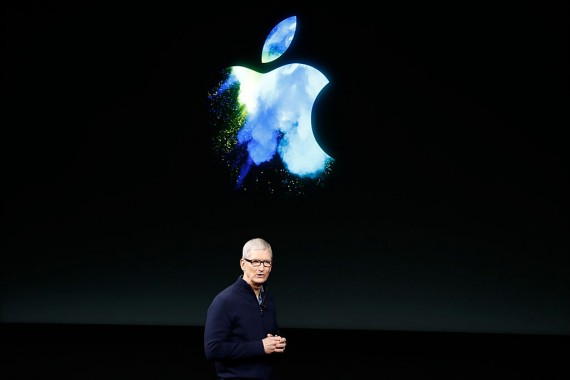 Analysts are fearing that Apple is leaning towards retiring its desktop line of Macs. The reason behind this speculation is due to the fact that Apple hasn't updated or done anything to improve their iMacs for 2 years already. But this theory isn't the case, according to Apple CEO Tim Cook. (Photo : Stephen Lam/Getty Images)

Analysts are fearing that Apple is leaning towards retiring its desktop line of Macs. The reason behind this speculation is due to the fact that Apple hasn't updated or done anything to improve their iMacs for 2 years already, which is usually a bad sign.

But this theory isn't the case, according to Apple CEO Tim Cook. According to him, Apple actually has some very interesting plans for the iMac line. These are plans that we will likely see is likely to unfold in the early part of 2017.

Macs are vital to Apple's revenue

There's no secret that Apple produces the majority of its Mac-based revenue from its laptop machines. This has been the case since laptops have more utility, and with an increasingly liquid kind of workforce, a lot of people now prefer the convenience of mobility that a laptop can offer over a desktop PC.

No love for the iMac?

This is probably the reason why Apple's MacBooks get updates at triple the frequency when compared to its iMacs and other desktop PCs. But let's not go thinking that the iMac systems are going to be obsolete. To the contrary, Apple appears to be gearing up for some new releases on its iMac lines.

Cook assures iMac will remain and be developed

Here's what Tim Cook had to say regarding the situation of the iMac as of the moment:

"Some people in the media have already raised the question about whether we are committed to desktops. If there's any doubt about that with our teams, let me be very clear: we have amazing desktops in our roadmap. Nobody should worry about that."

About the said 'roadmap'

The next big question now is when are we getting more information about this said 'roadmap' on the iMac? Are there going to be some updated designs on Apple's iMac lineup in 2017? Maybe even a new model that would incorporate the Apple Pencil, similar to Microsoft's Surface Studio? It seems that the latter is a possibility, given the popularity of Apple's iPad Pro line, to go along with the company's ongoing commitment towards making its products work even better together.

But either way, just by hearing all of these rumors and speculations, it seems that 2017 is already shaping up to be quite a notable year for Apple and its upcoming iMac 2017, especially with the company's biggest product, which is the iPhone, poised to receive a massive facelift, as well as a bunch of new specs, features, and capabilities.

How Can Apple Improve Its iMac PCs?

This is the next big logical question that would to mind when discussing future iMacs and Apple desktop PCs in general. What kind of improvements would we like to see on the iMac?

According to a lot of Apple rumors, the newest upcoming iMac 2017 will be featuring a 27-inch 5K Retina display, which is similar to the 2015 model. However, the difference is that the new iMac will be offering support for an OLED Touch Bar. There's also a huge possibility that the new iMac 2017 will feature the Intel Xeon processor instead of the Kaby Lake chipset.

Right now, there hasn't been any confirmed amazing rumors regarding the upcoming iMac 2017 refresh, but there is one thing that's going to be a definite lock in terms of upgrade: updated processors. With Intel owning and dominating the entire desktop processor market, that would only mean that the upcoming new version of the iMac will also be using the latest version of Intel's Core i7, which is the Kaby Lake i7-7700.

Why The New 'Apple iMac 2017' Is Postponed? Latest Updates On Specs, Release And More Unveiled

Apple has been reported to have been under development for its upcoming iMac for quite a while now. But with the updated machine not being mentioned during the recent October event, rumors have now been spreading that the iMac could potentially be postponed and delayed up until next year.

Will The 'iMac 2017' VR Compatibility Help Its Sales Success?

With recent reports confirming the coming of the iMac 2017, everyone is now pumped, as well as curious, about Apple's next big move for their upcoming supercomputer, especially after Microsoft has already released their revolutionary unit this year: the Surface Studio.

With no update on their PC brand ever since 2015, it's pretty easy for people to think that Apple has neglected one of its high-selling products, the iMac.

Despite the Apple iMac not being released nor announced during Apple's big October 27 event, fans are still hopeful that the Cupertino-based tech company will be announcing the device relatively soon. Rumors and speculations regarding the iMac 2017 are still continuing to spread the Internet world. Recent reports regarding the device claim that the Kaby Lake processor will be one of the newest features that will be incorporated into it.

During the most recent October 26 Apple Event, numerous tech enthusiasts expected that Apple would finally unveil the next installment for the iMac PC lineup. However, the "Hello again" event only focused on the newest versions of the MacBook laptops, leaving a lot of iMac followers dismayed and disappointed. However, according to the latest rumors and speculations, the newest version of the iMac has been set for released early next year instead. The reason for the delay? Intel's New Kaby Lake.

If we are to learn anything from these competitive tech companies going at each other, it's that designing your very own original hardware and then pairing it with your companies own self-designed software is the best way to attract people into liking it. Apple has been practicing this system ever since the company's inception, and just recently, Google has embraced this method through their Pixel devices. Microsoft is also doing the same with Surface, resulting in some top-tier Windows devices. Microsoft surprised a lot of fans with the surprise launching of the Surface Studio. People were expecting an All-In-One, which is why a Studio was a complete surprise. At some levels, it is a natural competitor against Apple's iMac 2016. With that being said, here's how the two machines square up

Rumors, speculations, and predictions are spreading out like wildfire for the new iMac 2016. Recent rumors have Apple's latest desktop being released along with the MacBook Pro 2016. With the iPhone 7, 7 Plus and Apple Watch Series 2 recently released, the iMac 2016 has now the full spotlight in itself as no Apple product will overshadow it any further. The iMac features some great components that would make it, as everyone considers, the best desktop of all time.

Apple iMac 2016 Will Be The Perfect Desktop For VR Support

The most anticipated iMac 2016 is finally making its debut on stage for the very first time this coming October 27, 2016. With that, people have been speculating that the new iMac is going to be the most improved installment of all the iMacs of the past. This is due to its outstanding features being added, like a new, improved, and very powerful processor which is Intel's new Kaby Lage chipset, an AMD Zen processor, in which both combined will really improve the graphics display of the iMac to a significant degree, and of course a Thunderbolt 3 and VR support, which is just right since judging by all the graphics upgrades that the iMac is receiving, will ultimately make it the perfect Desktop for VR support.

People are looking forward towards Apple upcoming October 27 event, which is speculated to be highlighting the latest Mac products, including the much-awaited iMac 2016, wich is also rumored to be boasting some newly improved hardware Specs. A highlight of this is the incorporation of Intel's Kaby Lake chipset onto the iMac, as well as the latest Mac OS Sierra, which many considers being the perfect combination along with other upgrades that the latest iMac is receiving.

Why the iMac 2016 Is Better Than The HP Envy AIO

The HP Envy AIO has neem dominating the PC scene so far with its amazing specs that are truly convenient to any user. But things are going to change as Apple prepares to be placing its all-new iMac 2016 into the mix, along with its amazing upgrades and performance improvements that would certainly take the entire PC community by storm. This also means that the HP Envy AIO is going to be meeting its match within a week from now.

The upcoming Apple iMac 2016 is expected to be released anytime this October. Fans have been waiting for so long for an upgraded version of the iMac. The newest installment will bring along a number of revolutionary upgrades and enhancements that would certainly change the way the iMac was formerly perceived. Now, with a much powerful processor and an enhanced display, the iMac 2016 will definitely have an exceptionally better overall graphics performance.

The release for the MacBook Pro 2016 is just around the corner. Apple fans have waited long enough for the MBP 2016 to finally be released and it is just a few days away. With that said. Speculations and rumors regarding the laptop's official features and specifications have been growing more and more as the release date draws near. Some even compare the upcoming iMac 2016 to be the PC variant of the MacBook Pro 2016. But with all the hype that the product is currently having, all will remain speculations and rumors until we actually see the real thing

Fans have been waiting for so long on the upcoming release of the latest installment of the iMac, the iMac 2016. Rumors have strongly suggested that the up and coming Apple PC will be released this October, along with some of the much-needed upgrades and enhancements. it has been reported that the iMac will come along with Intel's new Kaby Lake, a 7th gen Intel Core i7 processor. The new processor will provide the new iMac with a totally new outlook with enhanced graphics, making it a strong competitor to Microsoft's Surface AIO.